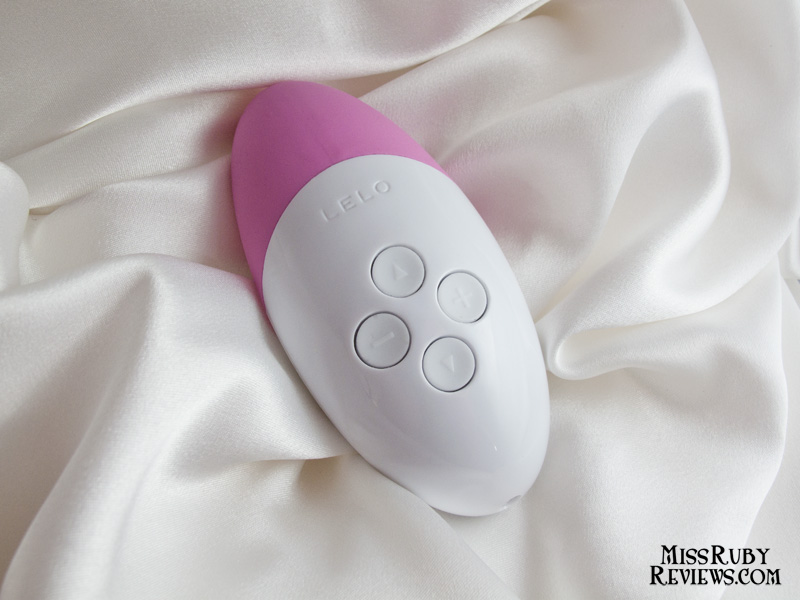 UPDATE: The LELO Siri reviewed here has been discontinued and replaced by the LELO Siri 2.  This updated model is waterproof, covered in silicone, and stronger.

Isn’t it cute? It looks like a happy little Easter egg. I kind of want to find a bird’s nest for it…

About the Store: Betty’s Toy Box

For those of you who haven’t come across this store yet, visit them now. If not to shop, then to ogle their gorgeous site design. As a sex toy reviewer, I see a ton of online sex toy stores, and Betty’s Toy Box is definitely one of the best in terms of aesthetic design and chicness. It’s a breath of 1950’s air, complete with polka dots and vintage-style pin-up models. They’re also Canadian, which I was thrilled to hear, and I hurriedly contacted them to see how I could work with them. Carolyn, their twitter manager, was very friendly and helpful in setting up this review.

Shipping was super fast. My order was processed on March 13 and my package arrived on March 18. Shipping for international customers may be longer, but Canadian shipping was very swift. The package that arrived was very discreet, with no hint or sign that it came from from a sex toy company. 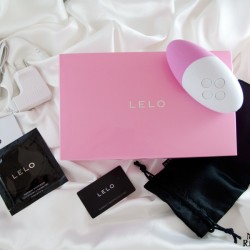 LELO’s packaging is perfect. I love how luxurious it is. Nothing about it is cheap or flimsy: every piece seems hand-picked for luxury.  In the lovely sleek box, you get: the Siri, a black satin storage pouch, a charging cable, a sample of LELO’s lubricant, the instruction manual and your warranty card. The storage pouch is really only big enough to comfortably fit the Siri, but the charging cable can squeeze in if you need it to.

I’ll try not to use “cute” too much in this section.

Design: The LELO Siri is an oval-shaped vibe that’s sized and shaped to fit comfortably in your hand. I find the Siri a lot more comfortable to hold during playtime than narrower vibes like the We-Vibe Tango, though the placement of the buttons is a bit annoying. During playtime, I’ve accidentally pressed the buttons on more than one occasion. One thing about this design is that it’s utterly not-obviously-a-sex-toy. I’m not worried about this being recognized as a sex toy unless it’s by a person who already knows the LELO brand. For this reason, if you’re curious about sex toys, or want to introduce sex toys to your partner, the Siri is a good choice: it’s discreet and fairly innocent-looking.

Colour: Siri sports the first shade of pink that I actually like on a sex toy. Generally speaking, if a sex toy is going to be pink, it’s going to be a loud HOT pink. But this is a soft, feminine, adorable pink. It reminds me of Easter egg hunts and strawberry ice-cream. For non-pink lovers, the Siri also comes in a bold red and purple.

Material: This vibe consists of body-safe materials. The pink portion is LELO’s legendary silky-soft silicone. The white handle is a hard ABS plastic. This means that this vibe is non-toxic, phthalate-free, and perfectly safe for skin contact. 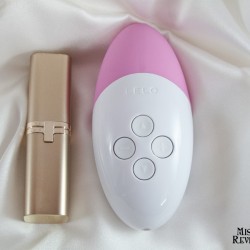 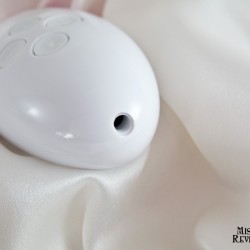 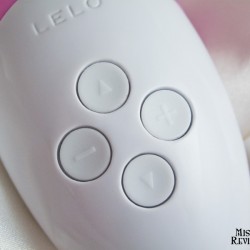 Buttons: – and + to change strength; up and down to change pattern

Vibrations: Is it the strongest vibe on the market? No. Like its pink colour, the Siri’s vibrations are fairly soft, gentle, and soothing. If the We-Vibe Tango gets a score of 10 in terms of vibration strength, the Siri gets a solid 6. Is it enough to make me orgasm? Yup. Do I wish it was stronger? Also yes. Only the highest strength is enough to appease me, but women with more sensitive clitorises may be happier with the lower speeds.

Though the shape looks like it could provide both pin-point and broad stimulation, the majority of the vibrations are found at the smallest point, so I’d say this vibe is best for pin-point stimulation.

I’ve noticed that some vibrations are lost in the handle itself. ABS plastic generally transmits vibrations very well, and it’s no exception here, which is a shame.

Buzzy vs Rumbly: The vibrations themselves are gloriously rumbly during the lower speeds, but the highest speed is discernibly buzzy. This reminds me of the LELO Mona 2: at lower settings, it gives you a rumbly purr, but the higher you go, the higher the sound becomes and the buzzier your hands feel.

Noise: This vibe is sufficiently quiet.The highest speed can be heard in the same bedroom, but it certainly won’t be heard through walls or a closed door. Its sounds are also muffled quite well by blankets, so if you’re in a house where you need to be completely discreet, this is a good choice. 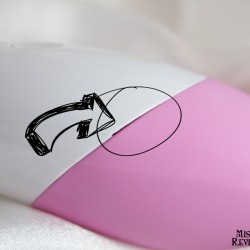 Other Features: And, yes, the Siri is rechargeable! It plugs directly into the wall. When it’s charging, a white LED light blinks. It takes about 2 hours to charge it up and lasts for several hours once charged. However, Siri is not waterproof, which is definitely a downside because it makes cleaning difficult. LELO warns against getting water in the buttons or the charging hole, which I’ve found to be really tedious, especially seeing as cheaper vibes already have this down pat. There’s also a gap on the sides of the Siri (pictured above) and it’s a huge pain to clean these.

My Experience with the LELO Siri

I was worried about this vibe at first. During my first session of playtime, I wasn’t hooked on the Siri. Nothing but the highest vibration speed could catch my clitoris’ attention. But, because the highest speed is rather buzzy, my hand and my clitoris started to go numb. I was impatient and I wanted instant results, which I didn’t get.

The next sessions were much more successful. I was more patient and happy to take things slow.  I warmed up using the lower settings, then ramped up to full speed when I felt ready. When I realized my hand was going numb, I switched over to the pattern modes, which helped the numbness a great deal. 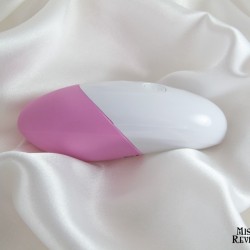 There’s a theme to this vibe: soft pink, soft sounds, soft vibrations. It’s no different with the orgasms this vibe gives me: soft and slow and gentle. In this instance, soft is good, soft is nice. I’m so used to the surprising and hard & fast orgasms the Tango gives me that I’ve started to forget how much I like gentler pleasure. In short, once I understood the sort of sensation the Siri offers, I could lie back and enjoy.

I’m a huge fan of pin-point stimulation, and what I like about the Siri is that it provides me pin-point clitoral stimulation and a bit extra. The widening curves of the vibe’s body add extra vibrations to the surrounding vulva, which is seriously amazeballs. You will love this, especially if you have a deep-set clitoris. While the narrowest point pushes in to vibrate against your clitoris, the widening angle of the vibe’s sides stimulates your outer lips.

Will this vibe be strong enough for power queens? Perhaps not. Despite this, I think the Siri is an awesome little purchase that offers a lot. If you’re starting out with sex toys, the Siri is a good introduction because its so discreet and innocent-looking. If you live in a house full of people, this is a good choice because it’s so quiet. If you’re happy with  moderately-strong vibrations that occasionally err on the buzzy side, this vibe can make you very happy.

And did I mention that it’s cute?

To buy the LELO Siri, head on over to Betty’s Toy Box.

Note: The LELO Siri reviewed here has been replaced by the LELO Siri 2. This updated model is waterproof, covered in silicone, and stronger. You can purchase it here.