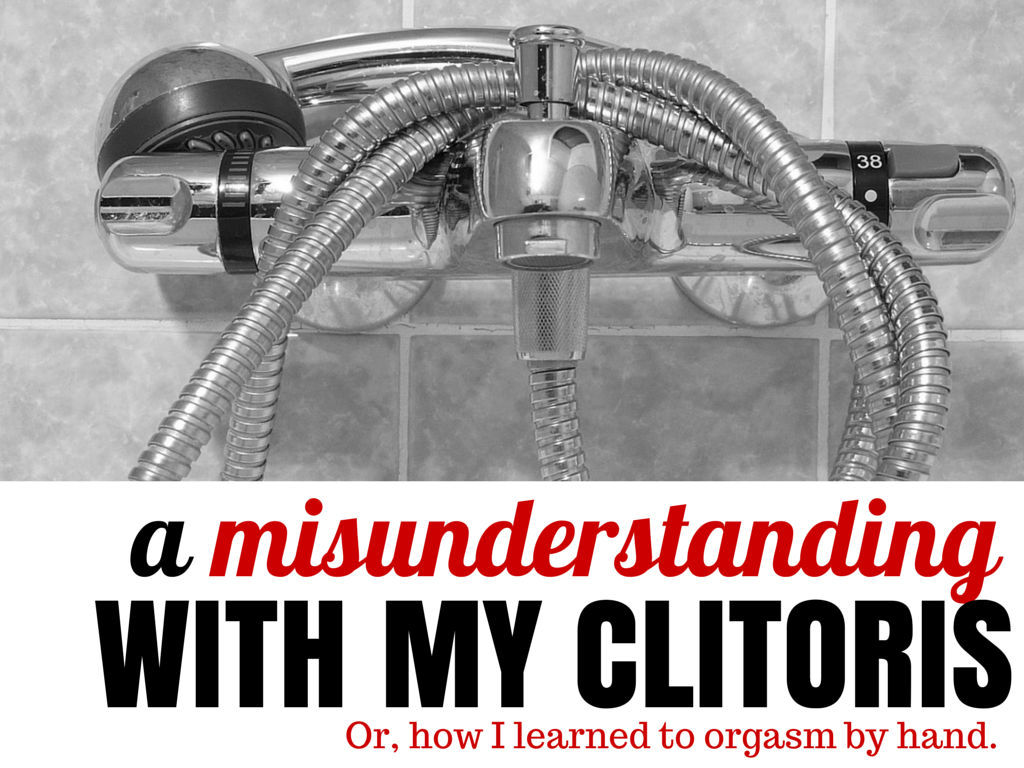 It was all basically a misunderstanding between my clitoris and I. It’s kind of hilarious, really, in a sad sort of way.

For years, I couldn’t manage an orgasm using my hands. When I first started having orgasms, it was via a showerhead. Yes, a showerhead. As in, those telephone-style hand-held things that you unhook from the bracket on the shower wall and set to high-speed jet/massage mode. And then move it between your legs and point it at your clitoris. I’d have to squat down close to the bathtub floor, because my legs would shake and thrash and threaten to undermine me if I kept standing.

During those early years of orgasm-making-magic, my “shower orgasms” were all I knew. It was all I knew for 3 orgasms per shower per day, for every day in every year. I didn’t even realize I was having orgasms. At first it only felt like a slight crescendo before crashing down to painful sensitivity. But, gradually, the sensations grew stronger and more pleasurable until, by 18, I had to admit to myself that the little things I had in the shower must be the esoteric female orgasm.

Determined to expand my list of “came-in” rooms, I tried to just use my hands in bed. My fingers were willing, but my clitoris was not. It was so much easier to use a showerhead. That solid jet of hot water got me there within a few minutes, whereas my hands would have to go on for ages, with no luck.  The sensations were strong and predictable in the shower, and I gave hearty credit to the hot heat and the high-pressured massage of the water stream.

A Little Help From My (Men) Friends

When I started my first serious relationship, I was hoping that the mere presence of a sexy partner would immediately and instantaneously make it so that my clitoris responded to non-water stimulation. I could accept that my own hands just weren’t amazing enough for my discerning clitoris, but a man’s hands? A man’s tongue? Penis? Those had to be automatically incredible, right?

I was sorely disappointed with man-hand and man-tongue and man-penis. If it didn’t just feel awkward, it felt like nothing. I was attracted to my partner, and I was turned on well enough, but my clitoris remained its stubborn old self. My partner tried to please me, very hard, and I always had the sneaking suspicion that if I were any other person, I’d be having all the orgasms I could handle.  Over the years, all my partners tried to make me come. But nothing. Just disappointment and a sinking feeling that I was abnormal, as well as the growing habit of faking orgasms.

And my own hands were equally useless in bed with my partner: my own hands couldn’t make me orgasm any more than theirs could. No matter how many how-to-make-your-woman-cum guides I read, I couldn’t get any useful information. All the guides meant to help someone pleasure someone with a vagina said things like “listen to her moans — they’ll tell you what you’re doing right!” and the guides for vagina-owners on how to orgasm all said, “listen to your body — it’ll tell you what’s right!”

It was much easier to have steamy sessions with my partner and then go home and seek solace in my trusty showerhead.

My growing disappointment wasn’t just about being able to satisfy myself in bed when I was alone. It was about having a more satisfying experience with my partners. I was tired of never sharing in the growing climax of pleasure, I was tired of faking orgasms, and I was tired of feeling like my orgasm wasn’t even considered because it wouldn’t ever happen.

I eventually realized that I couldn’t expect my partner to give me an orgasm when I myself didn’t know how to have one. I had to know my body at least well enough as they did.

One evening when I was 20 years old, I was playing video games at my desk, alone in my first apartment. My mind had been drifting and it occurred to me that my clitoris was hungry. Instead of shutting my game down and heading to the shower, I stayed put. I wasn’t even thinking of what I was doing. I simply half-stood from the chair so that my bum was a few inches off the chair seat and my legs were flexed and twitching from the strain.

And I rubbed. And I came 10 seconds later.

And then I sat down, my pelvic floor exhausted, and wondered what the heck just happened.

I learned about the kegel muscles that day. And I couldn’t stop laughing. I was hysterical.

And that, people, is how I learned how freaking important kegel muscles are.

If you’re interested in improving your kegel muscles, I suggest you purchase kegel balls. I recommend the fantastic Luna beads set.