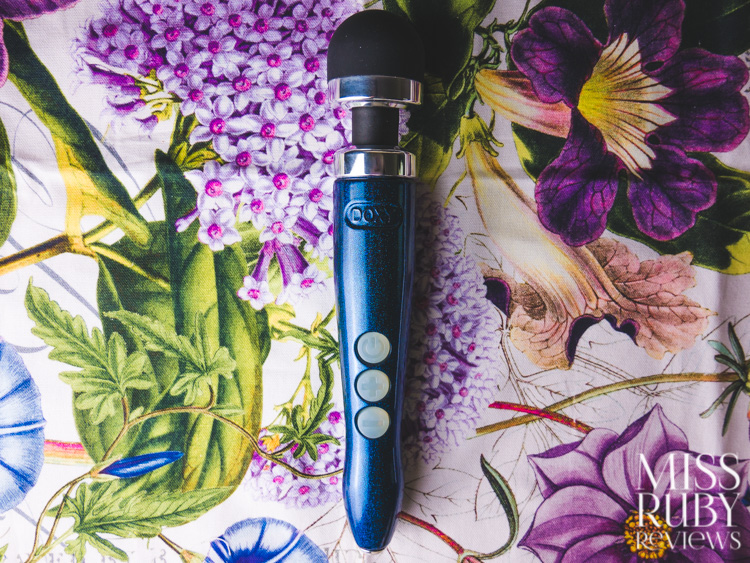 Isn’t this wand a beauty? Read on for my Doxy Number 3R review!

Design | How to Use | Packaging | Material and Care | My Experience | Overall 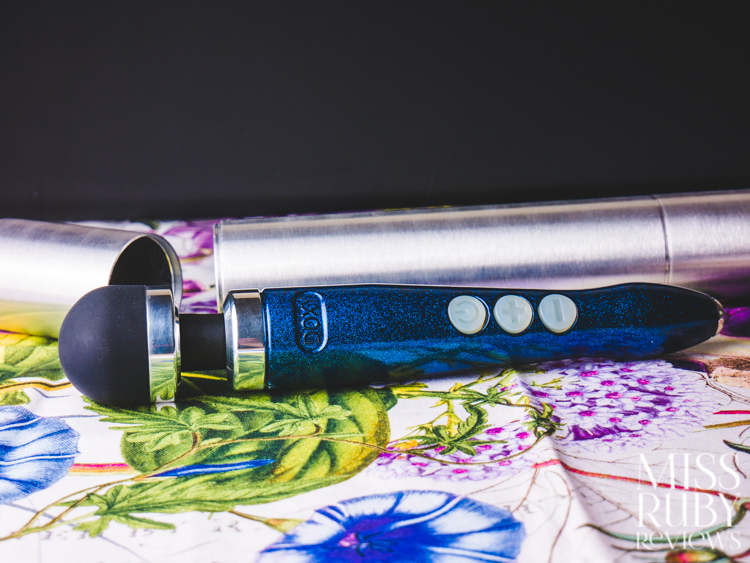 Let’s just start by saying Doxy made my favourite wand EVER. The Doxy Die Cast wand blew me away a few years ago, and I’ve possessively clung to it ever since. After that point, I’ve been very interested in Doxy’s new products, so I was thrilled to see Doxy release this new smaller, rechargeable model.

Just look at that bod! The Doxy Number 3R has a unique, sparkly body in “Blue Flame” colour. This shade of blue is a true, shimmering sapphire. It sparkles and glitters with the light, yet feels totally smooth and flawless to the touch. This toy is also cordless, rechargeable, and the head unscrews for easy cleaning.

This aluminum, titanium and silicone construction also feels well made. No flimsy plastic body to be found here… And at over 350 grams, this has some clobbering power in it. 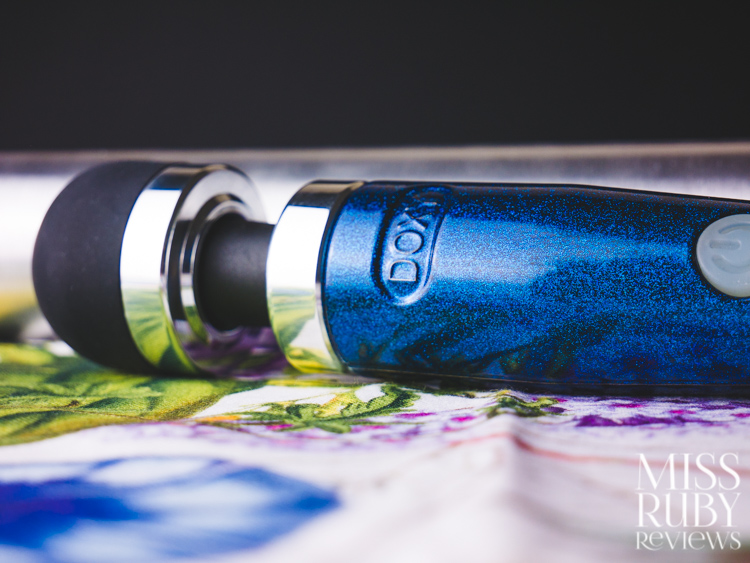 All of the attachments are bodysafe silicone. For silicone attachments that really expand the capabilities of your Doxy wand, the prices are pretty reasonable. If you or your partner has a penis, I particularly recommend adding the penis masturbator sleeve attachment to your cart. 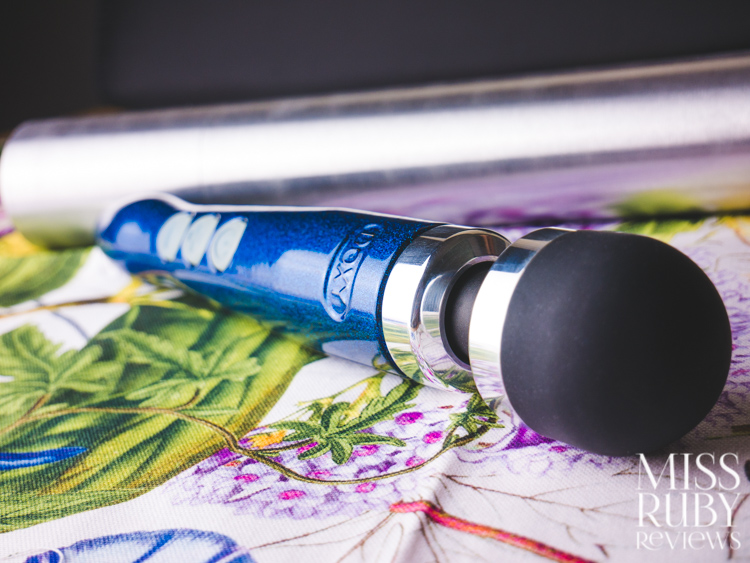 How to Use the Doxy Number 3R 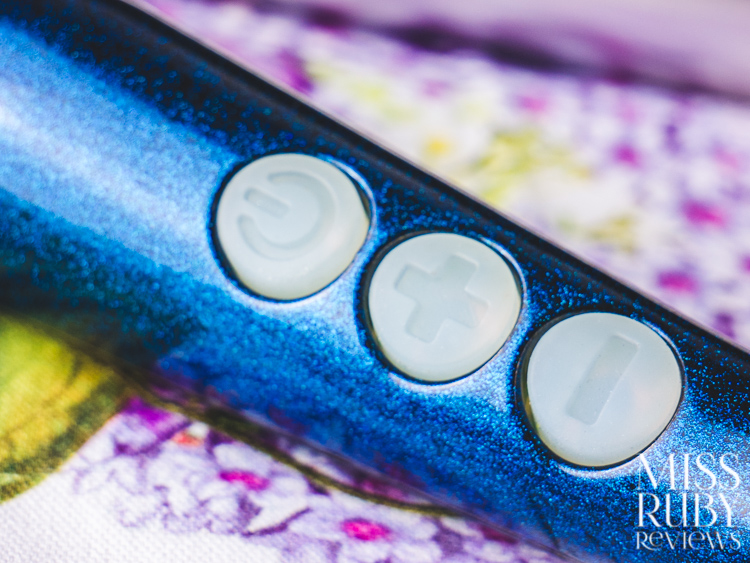 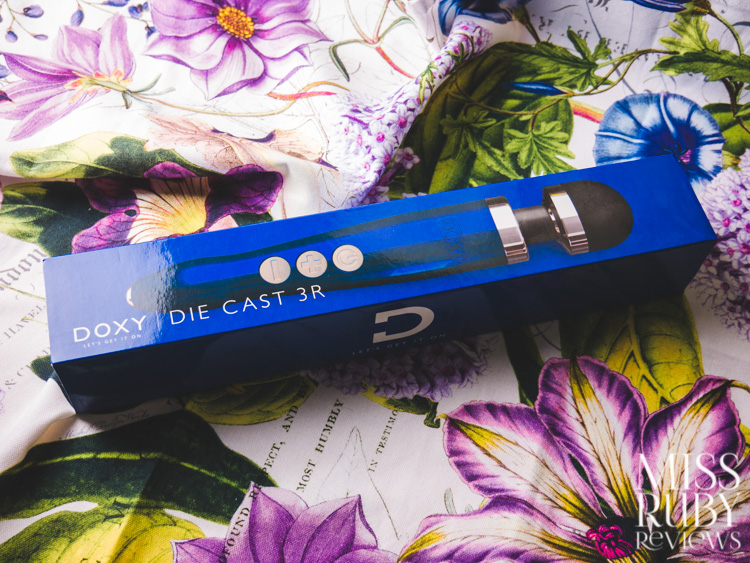 The outer box is blue and simple.

When you open the black box, you’ll pull out a brushed aluminum tube that opens on both ends.

By unscrewing the shorter of the two caps at the end, you’ll reveal a USB charging cable. When you unscrew the taller cap, you open the tube and the Doxy Number 3R can be pulled out. You also receive an instructions booklet. 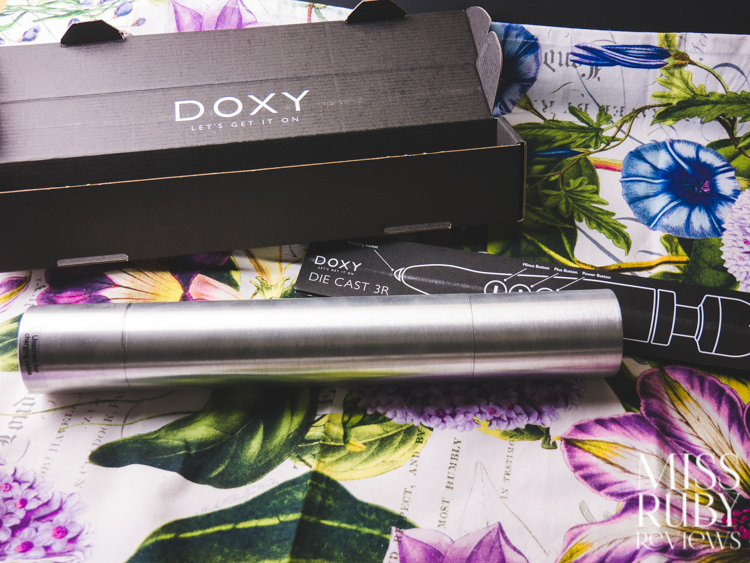 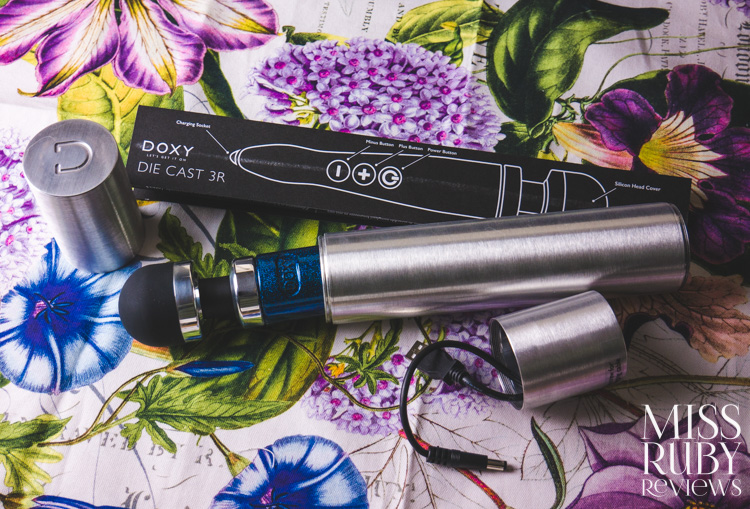 Inside the box: The Doxy Number 3R, an aluminum case, a USB charging cord, and instructions.

The Doxy Number 3R‘s head is made from silicone, making it bodysafe. To clean the head, unscrew its black head; it separates from the metal rim. Wash the separated silicone portion under warm, soapy water after each use.

The Doxy Number 3R‘s body is made from brushed aluminum and titanium, another safe material. If you want to clean the body itself, Doxy recommends wiping with a damp cloth, a disinfectant wipe, or a sex toy cleaner. The body isn’t waterproof, so don’t get the body wet.

To charge, connect the provided USB cable to the port at the base of the wand. Then plug it into your computer or a USB wall adapter. While it’s charging, the power button is red. That light turns off when it’s fully charged.

If you use this at the top speed, you’ll get around 1 hour of playtime. A full recharge will take about 4 hours, which isn’t a great charge:play ratio.

To turn on the travel lock, press the power button and — button at the same time; hold for about 4 seconds. This makes it so that the Doxy won’t turn on accidentally when you don’t want it to. To turn off the travel lock, do the same thing again.

This wand comes with a 1-year manufacturer’s warranty against factory defects. It doesn’t cover liquid damage or damage caused by misuse.

My Experience with the Doxy Number 3R 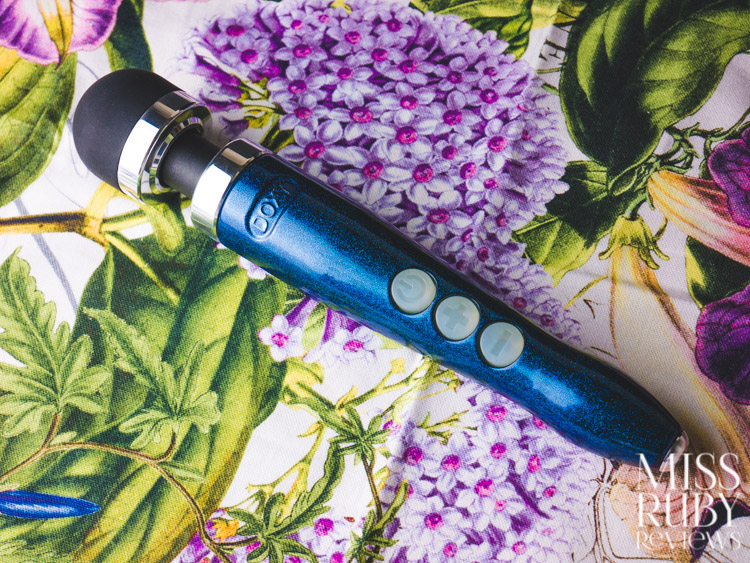 As expected, I adore the Doxy Number 3R.

Some sex toys kind of force an orgasm out of you. The Doxy Number 3R is one of them. That’s because the strength of this petite beast is astonishing. I’ve been reviewing so many other wand brands this year that I’ve forgotten just how strong small wands can be, when they’re made by Doxy. The vibrations are rumbly, fierce, and bring on my orgasms sporadically and without hesitation. Using this is a workout.

I don’t even need to use the top speeds — medium levels are plenty strong for me… so I think this will satisfy most power queens. I can’t imagine myself ever needing more strength than this.

For those of you who generally avoid wands because of their large, broad head, then a smaller model like this might be better suited to you. The narrower head really helps you focus the pleasure. It’s not “pin-point” like a bullet would be, but it’s a great deal more focused than the original Doxy Die Cast.

This isn’t a quiet toy, though. It’s certainly noisier than the Doxy Die Cast‘s low rumbly purr. At the top speed, I’d be worried about it being heard through my bedroom walls if I had roommates.

I also love that Doxy finally has a cordless wand option. You’re paying to be able to forgo the cord, but it’s a nice luxury. Not being chained to a wall outlet is liberating. You can take this around your house, into your yard, to camping, wherever.

Of course, this is also one of the most expensive small wands out there. It’s priced at $189 USD, the same as the full-sized corded Doxy Die Cast. That’s a staggering step up from my current favourite small wand, which only costs $69. But when you buy the Doxy Number 3R, you’re paying for serious horsepower, a strength that smaller brands can’t compete with. 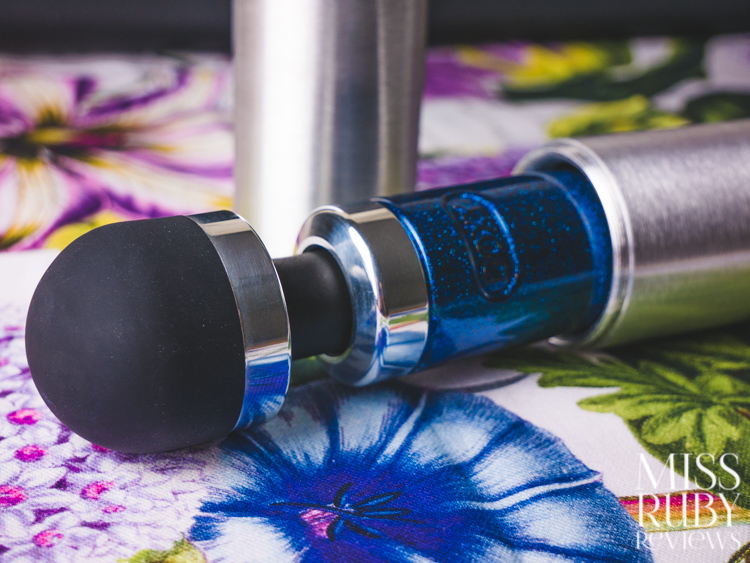 What makes the Doxy Number 3R different than other models? 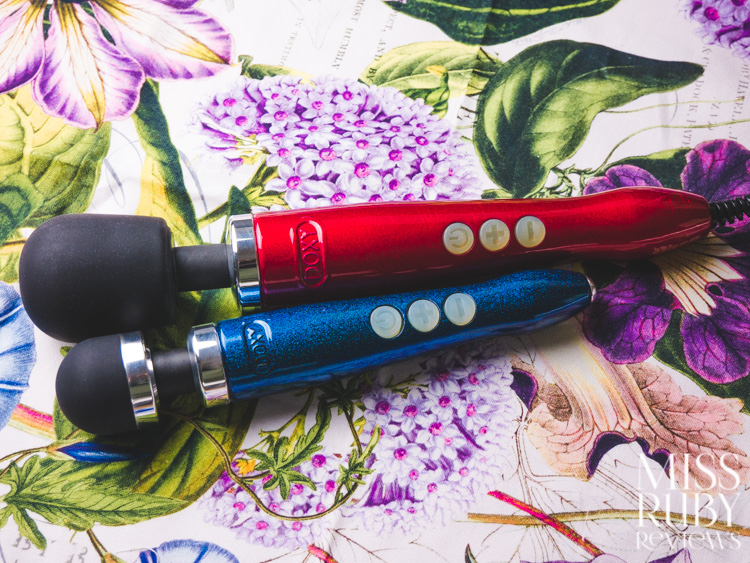 Above: The Doxy Die Cast (top) and the Doxy Number 3R (bottom)

a) Compared to the Doxy Die Cast, the Doxy Number 3R is: 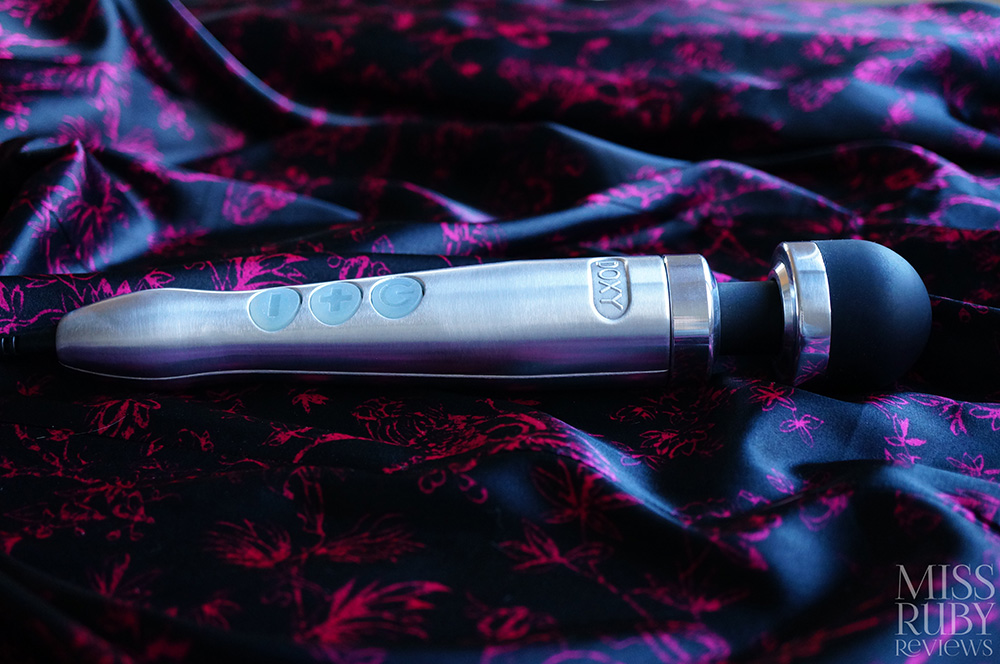 Above: The Doxy Number 3

The Doxy Number 3R is definitely something to add to the wishlist if you’re a fan of luxury petite wands, especially cordless ones. It’s gorgeous with its glittery blue titanium body, of course, but the real draw here is its vivacious strength. Good-quality, strong, rumbly power like this goes a long way.

You can pick up your own Doxy Number 3R wand at Peepshow Toys! Why do I like Peepshow Toys? They ship internationally, only carry body-safe products, and you can get a 10% discount off your whole purchase with coupon code RUBY.

See below for my Doxy Number 3R review summary. 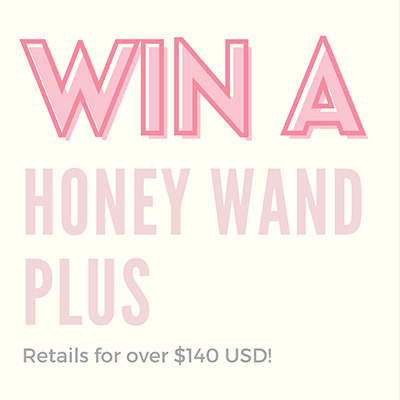 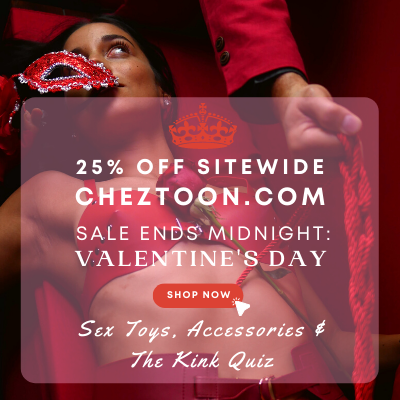 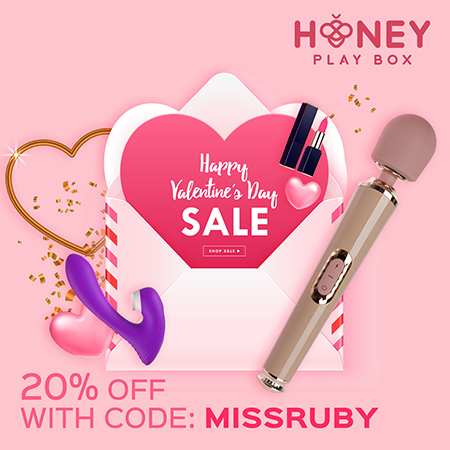