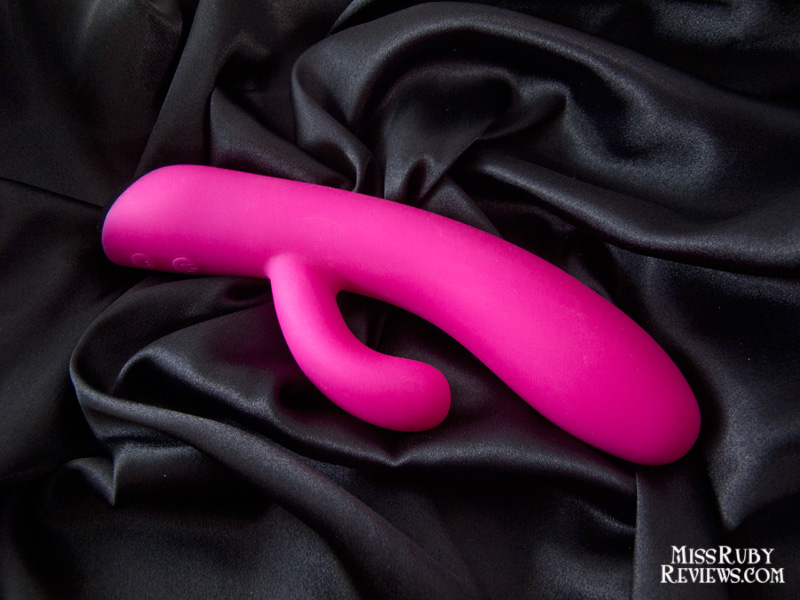 Update: This toy has been replaced with the Blush Novelties Aria. Links have been updated throughout this post.

Hurrah! The most flexible rabbit I own.

The shaft curves upwards slightly for g-spot stimulation, and the clitoral ear juts out to hook your pubic bone. There is no texture or bumps for additional sensation, though the Serendipity line does carry other versions that have ridges.

One thing I like about the design is that the whole vibe (but especially the tip of the shaft and the clitoral arm) is fairly squishy. Not very squishy, but there’s definitely some give to it when you press into it with your finger. Also, the clitoral arm is really flexible! It can be bent far backwards towards the handle at a larger than 90-degree angle, which is something I’ve never seen in a rabbit vibe. This means that, if you’re someone who finds most rabbit vibes to pinch or put too much pressure against your clitoris, you might appreciate this one’s flexibility. And, if you need firm pressure, you can simply apply additional pressure by pressing the clitoral arm against you with your finer. The whole shaft is also quite flexible, really, and you can nearly bend the shaft completely in half. To date, this is definitely the most flexible rabbit vibe I own.

This is a rather short toy. There are only 4.5 inches of insertable length. The clitoral ear will reach cis women with a C-V distance (clitoris-to-vaginal opening) of 2 inches. As always with rabbit vibes, I suggest that you measure your C-V distance against these measurements to see if the clitoral ear would reach your clitoris. 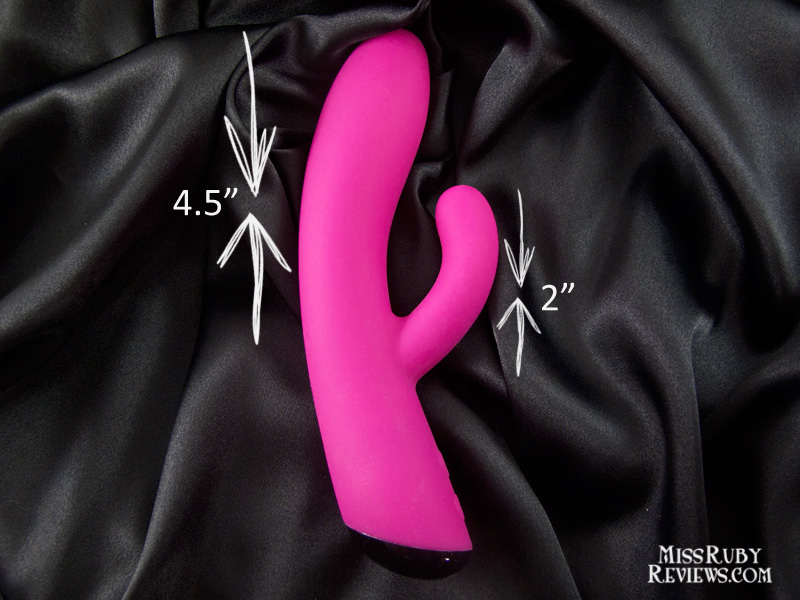 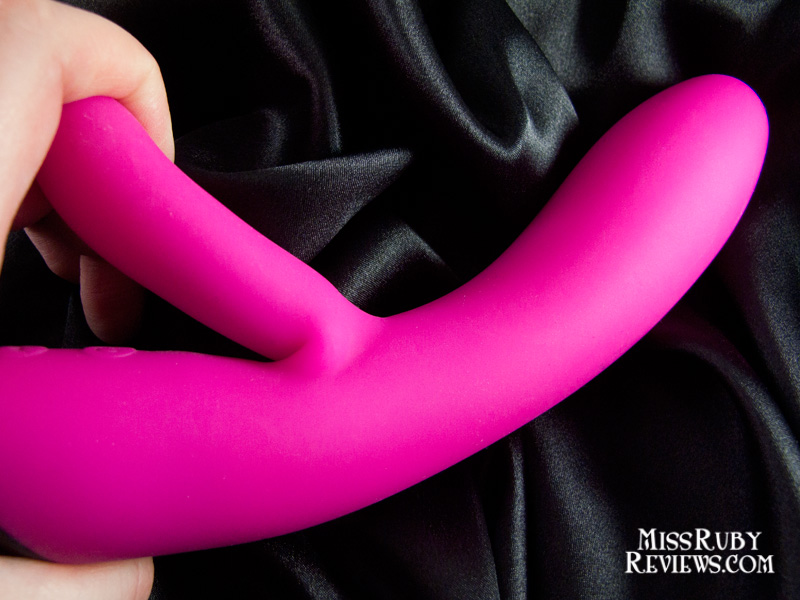 Amazing flexibility in the clitoral ear

The Serendipity Euphorabliss offers 3 steady vibration speeds and 4 pulsation patterns. The vibrations themselves are moderately strong (6/10). The majority of the vibrations lie in the very tip of the shaft and the clitoral arm, making this vibe ideal for cis women whose clitoris falls right against the ear’s tip. The shaft’s vibrations are somewhat rumbly, but I find the clitoris ear’s vibrations to be mostly surface level.

The Serendipity Euphorabliss is waterproof, which means that it can be submerged in water. Make sure the charging port is totally secured because water getting inside the charging hole will damage the motor.

This rabbit is also rechargeable! Woo! I charge it up for two hours after use and lasts for about 50 minutes. I’ve noticed that its charge keeps really well during inactive days, so you can charge it up well before you intend to use it. One thing to note is that the charging needle plugs into the vibe in a port in the handle. The port is covered by a soft pull-out material for waterproofness. To charge your toy, pull out the flap that covers the hole which the arrow is pointing away from. I was confused initially because the other flap has an arrow pointing towards it, so I obviously assumed I needed to pull out that flap. But no, that doesn’t work. Pull out the smaller flap, the one the engraved arrow is pointing away from. 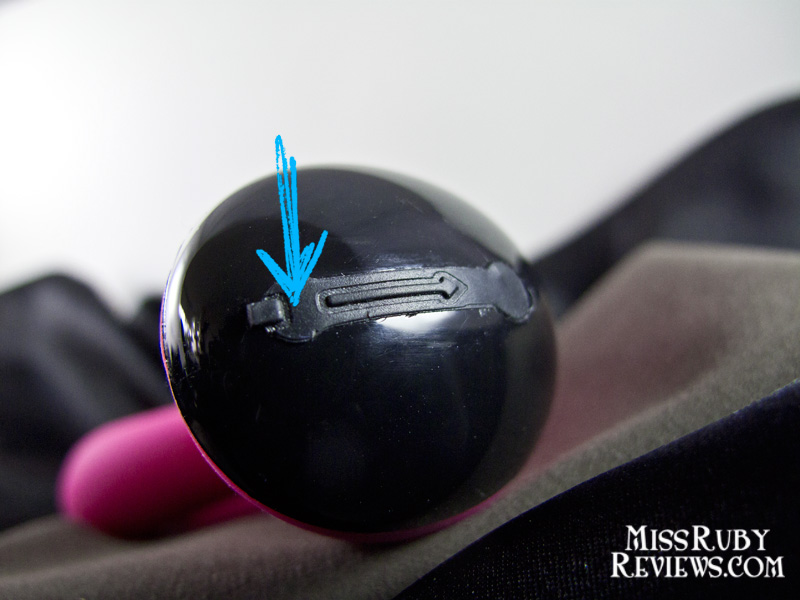 Use smaller side, not the side that the arrow points to.

Lastly, a word on packaging. I really liked the Euphorabliss’ packaging. The packaging isn’t crude or ugly. It’s rather elegant. Inside the box, you receive the Euphorabliss, a sturdy canvas-material storage pouch, an information booklet, and the charger. 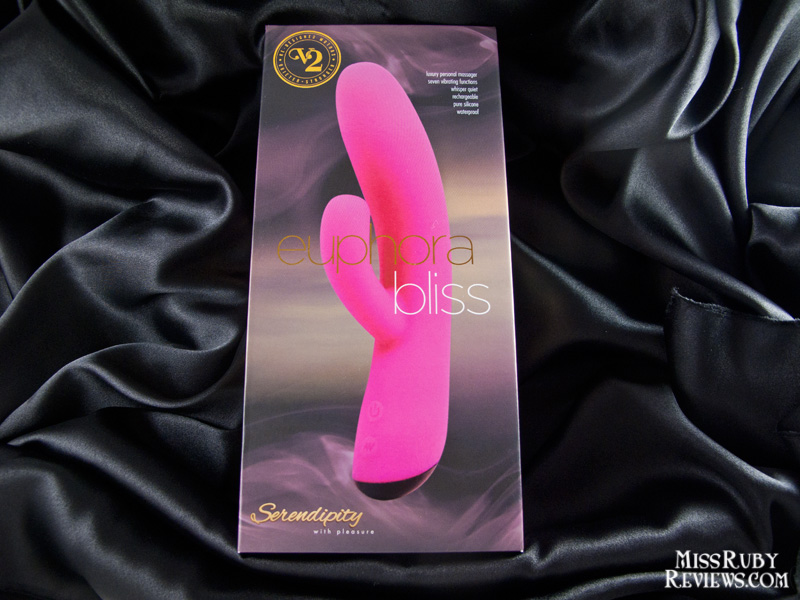 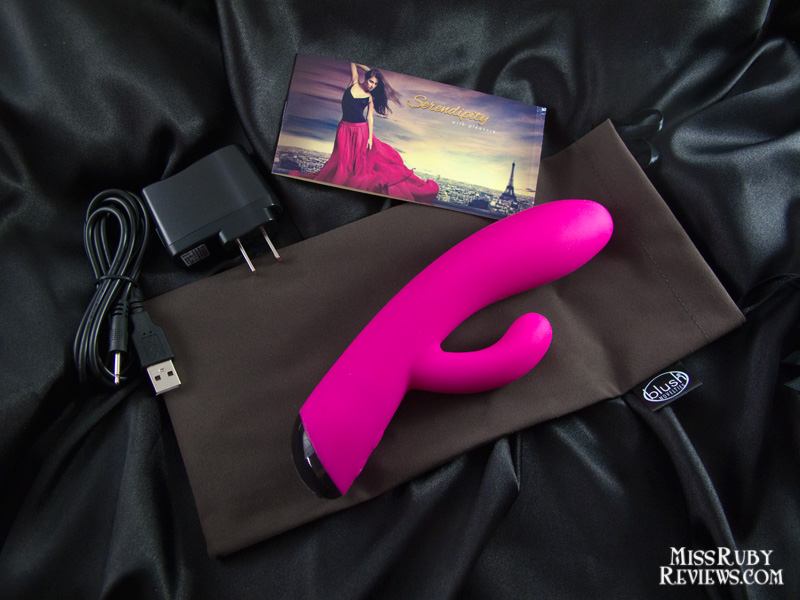 The Euphorabliss is covered in pure silicone, except for the ABS plastic at the tip of the handle. That means that this toy is non-toxic, phthalate-free, and bodysafe. This toy’s silicone finish is matte and silky to the touch. It’s not sticky at all. I wash mine with warm soapy water before and after each use. When it’s dry, I store it in the included drawstring pouch.

My Experience with the Blush Serendipity Euphorabliss

I was thrilled to find out that the Serendipity Euphorabliss‘ clitoral ear meets up perfectly with my clitoris, not overreaching it or missing it. This is great, but also a bit confusing, because when I tried the Lelo Ina Wave (whose clitoral ear is longer than this one’s), it was nearly too short to reach my clitoris. I’ve realized that, because this vibe has such a wonderfully flexible clitoral ear, it somehow accommodates a wider range of C-V distances. Woohoo!

First, the good stuff. The G-spot vibrations feel great when they’re on the highest setting. The main shaft gives off moderately strong vibrations that can be felt directly against my g-spot because of the curve in the shaft. I also find that this rabbit makes for a great thrusting toy, which is a first for me in terms of rabbit toys. I usually just insert the rabbit and hold it in place, but not with this toy. Because the clitoral ear is so bendy, I can thrust the toy in and out without fear that I’ll be punching or pinching my pubic bone with the clitoral arm as I thrust inwards. That being said, I especially enjoy this toy swiveling from side-to-side in a twirling motion, as my G-spot goes a bit nuts from side-to-side stimulation. Lastly, I find the handle very comfortable to use. The vibrations don’t travel down the handle too much, so your hand won’t go numb from the shaft’s vibrations. 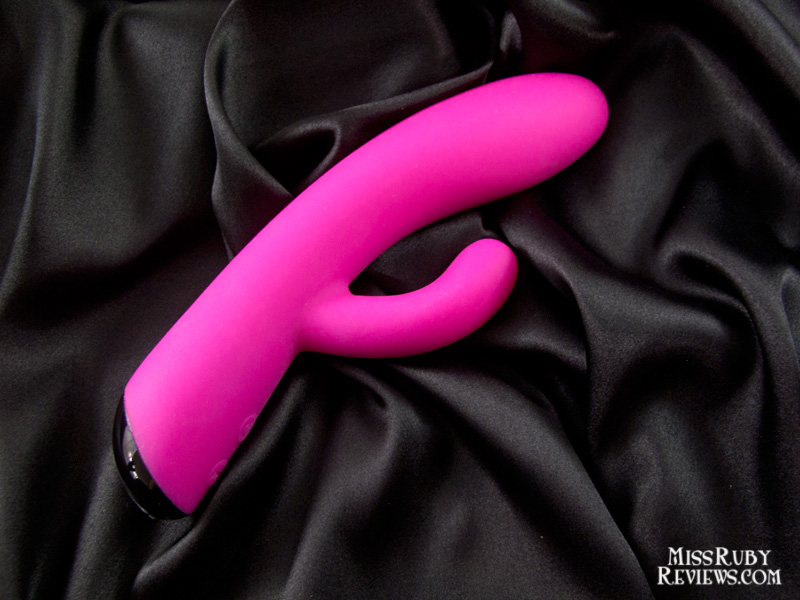 There are a few drawbacks to the Serendipity Euphorabliss though.

Also, I’ve noticed that it’s way too easy to hit the buttons and change the speeds accidentally. The position of the buttons make it so that, when you’re trying to thrust this toy, the side of your palm very easily brushes against the sides of the buttons. Because they’re so easy to press, even just a little bit of pressure from your hand will click the button to the next setting. It would have been better had the buttons been on the very bottom of the vibe.

This toy didn’t work for me as well as I would have liked it to. While the g-spot shaft’s vibrations are solid, the clitoral arm is either too weak or too buzzy to appease my clitoris.

For these reasons, this toy hasn’t been able to make me orgasm during any of the sessions spent with it, but that doesn’t necessarily mean it won’t work for you.  I have a somewhat hard to please clitoris, and I imagine that this might work for you if you have a sensitive clitoris. Also, I’ve heard that it makes a decent male prostate massager. But if you’re looking for a Blush rabbit vibe with a bit more kick to its clitoral vibrations, I suggest you take a look at the Blush G Rabbit Silicone Stroker instead.

Update: This toy has been replaced with the Blush Novelties Aria. Links have been updated throughout this post.