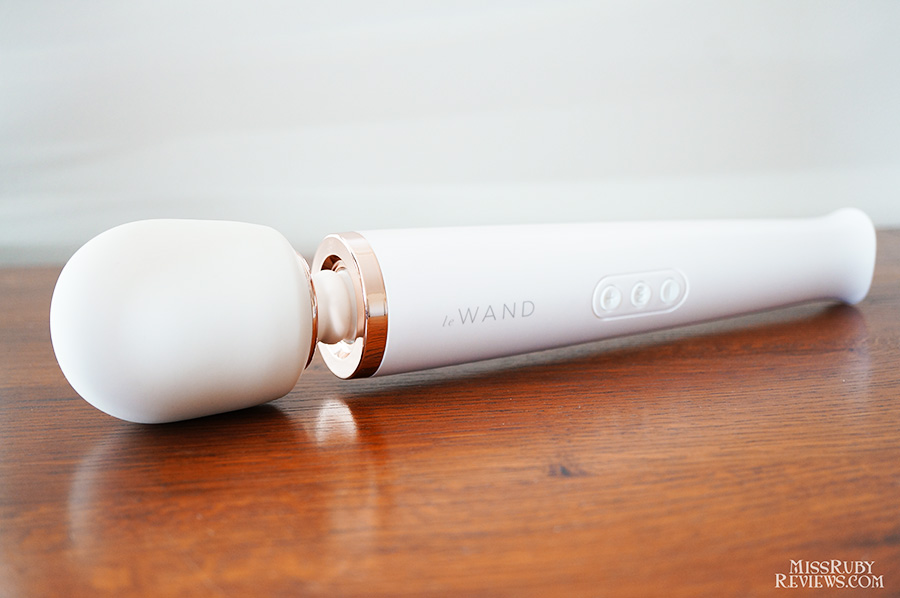 Oh, Le Wand. How much you remind me of someone I know. 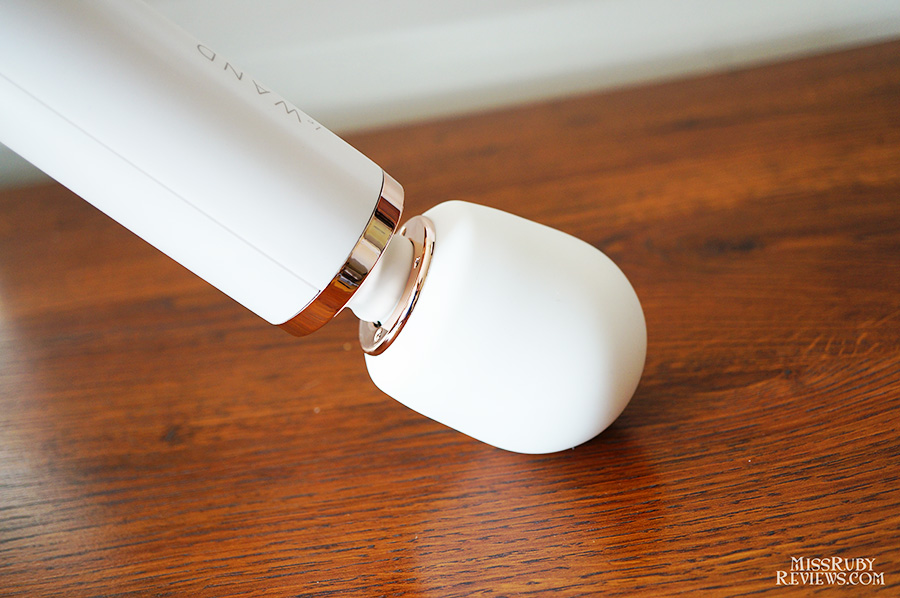 I don’t know about hassle-free (nothing is hassle-free if it’s not waterproof), but it’s certainly a pretty path to pleasure. The version I received is “Pearl White,” and it’s very…shall we say… spa-esque? Clean, white lines, simple controls, a body-safe silicone head, and rose-gold accents.

Starting with: why does Le Wand look sooooo much like the Magic Wand Rechargeable (MWR)? 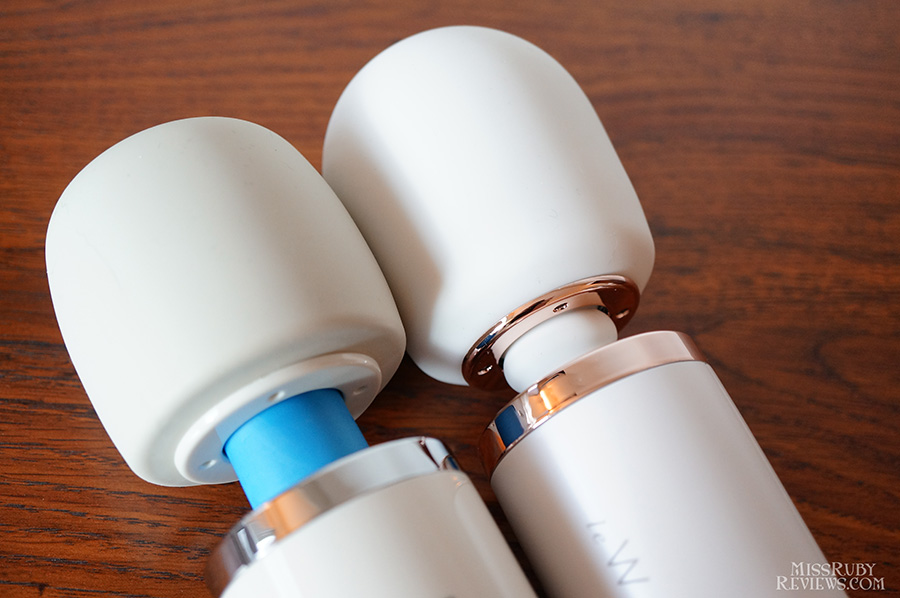 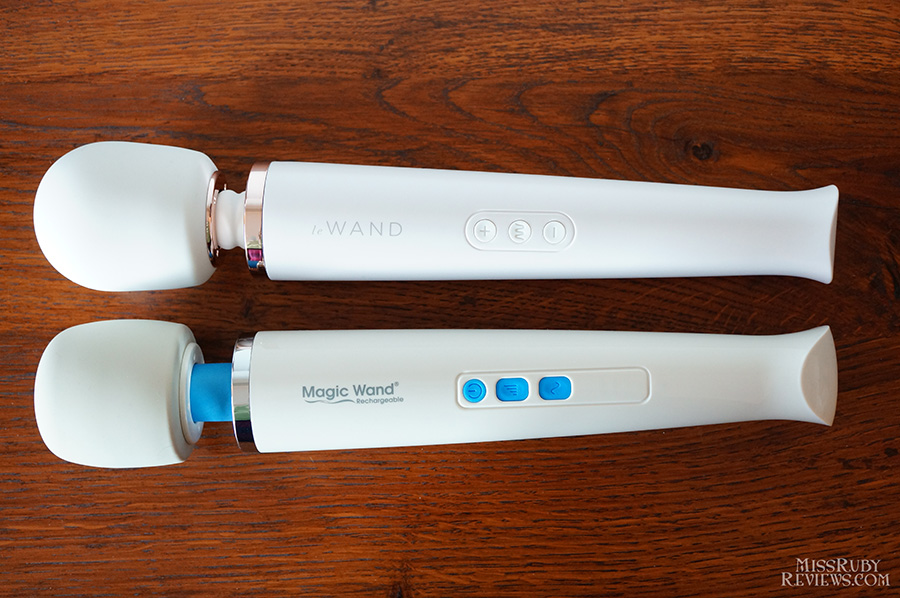 I understand that there can only be so much design variability when it comes to wands. There has to be a head and a relatively-long body, like any standard back massager. Fair enough.

But… Le Wand isn’t doing a whole lot to differentiate itself. The bottom of the handle flares out like the MWR. There are three buttons and they’re in the same place. A similar groove wraps around all three buttons. The title/label is in the same spot.  That pretty shiny band around the neck is seen as well in the MWR (they’re even the same width). And yes, they even have identical charging ports. To be clear: the Magic Wand Rechargeable was designed first (about two years ago). So I can’t help but feel that, in my opinion, Le Wand took perhaps too much inspiration from the massively-successful Magic Wand.

While Le Wand is prettier than the Magic Wand Rechargeable, I feel it’s just a prettier copy. Too many design elements seem styled/copied after the MWR. It’s disheartening. There doesn’t seem to be much originality here, and I much prefer original sex toys. But… I like the fresh colour scheme. It’s a nice bright, clean shade of white. The head is similar to the Doxy’s head, and I prefer that elongated shape.

Le Wand is respectably strong (9/10). When compared side to side, it seems around the same strength as the MWR. It can get me to orgasm and I have no doubt that it’ll be able to do the same for a lot of people. However, it is on the buzzy side. It’s not nearly as rumbly as the corded Doxy. In Le Wand’s defense, the MWR is also buzzy. But it’s not quite this much. Even when it’s turned on full blast, the vibrations don’t penetrate or reach me as much as I’d like. Also, buzziness can create a temporary numbing effect for me, which tends to prolong the time I take to orgasm and/or make me temporarily unable to have many consecutive orgasms in a short time frame. In other words, orgasms don’t flow as freely as they can.

Still, Le Wand certainly packs a punch. It’s not weak by any means. 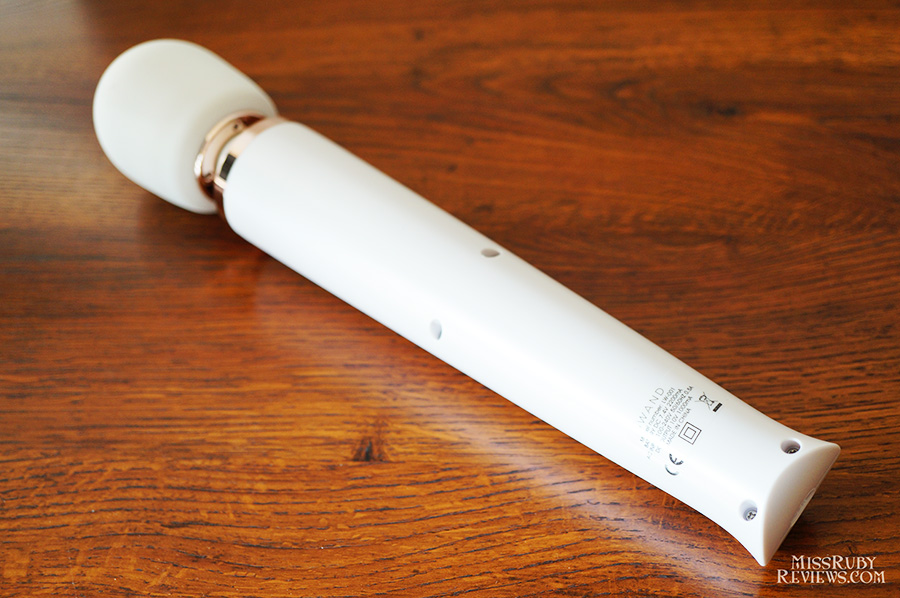 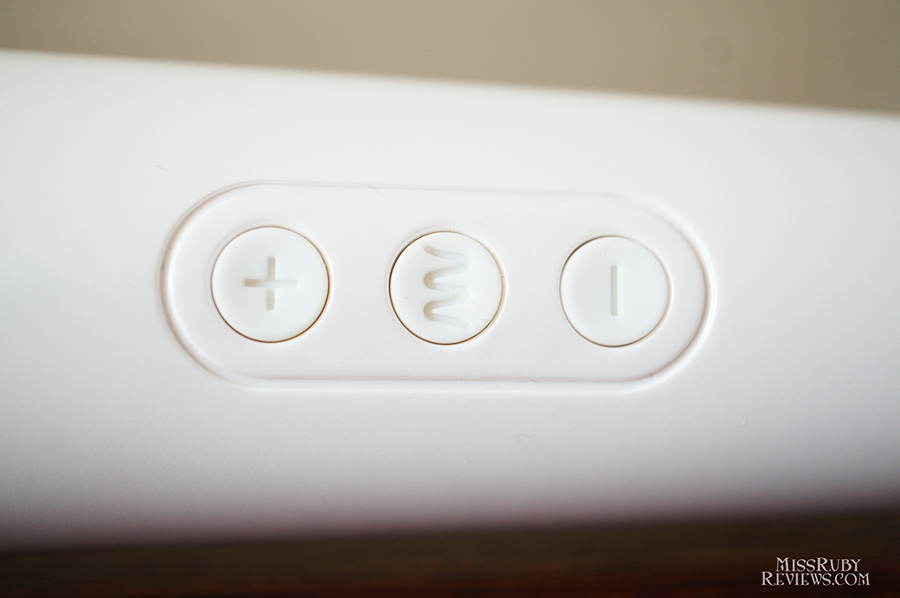 How to use Le Wand:

Le Wand is fairly intuitive. To turn on, press the + button. Continue pressing + to increase the strength, and press – to decrease it. To change the vibration pattern, hit the middle ~ button.

Le Wand boasts that it has ten vibration speeds. I count five. I’m not sure where the other five are hiding. I do count all twenty of the vibration patterns it says it has, so huzzah!

Noise: Le Wand isn’t as quiet as I’d like it to be (5/10).  There’s a chance it’ll be heard behind closed doors, especially at the higher speeds. Le Wand’s lowest strength setting is about as loud as the MWR’s highest setting. Le Wand’s sound is also a higher frequency, which often comes along with buzzier vibrations. 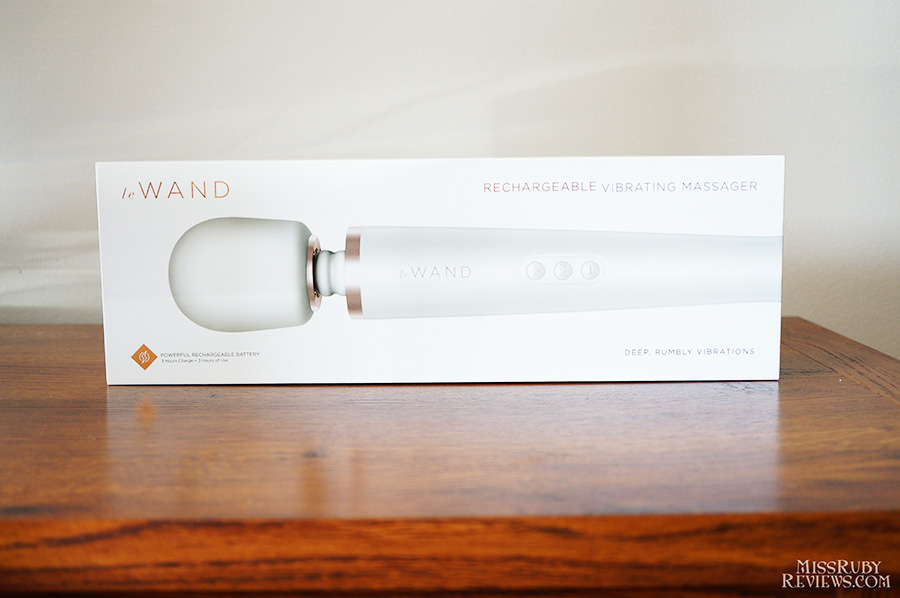 Le Wand has stunning packaging.  Between the MWR and Le Wand, Le Wand wins here, hands down. The MWR is packaged like something from the 1990s and there’s absolutely nothing luxurious about it. On the other hand, Le Wand’s packaging is gorgeous. The box is cleanly designed in white and peach. Inside, Le Wand is further encased in plastic. In a seperate compartment, you receive a manual, a charging cord, and fantastic zip pouch.

You also receive a textured head cover. This slips over the head (it does not replace the head). It’s made of Thermoplastic Elastomer (TPE). This is a common material for penis sleeves. But, as it’s porous, it isn’t something I’d recommend for long term use on your vulva. Definitely no sharing. 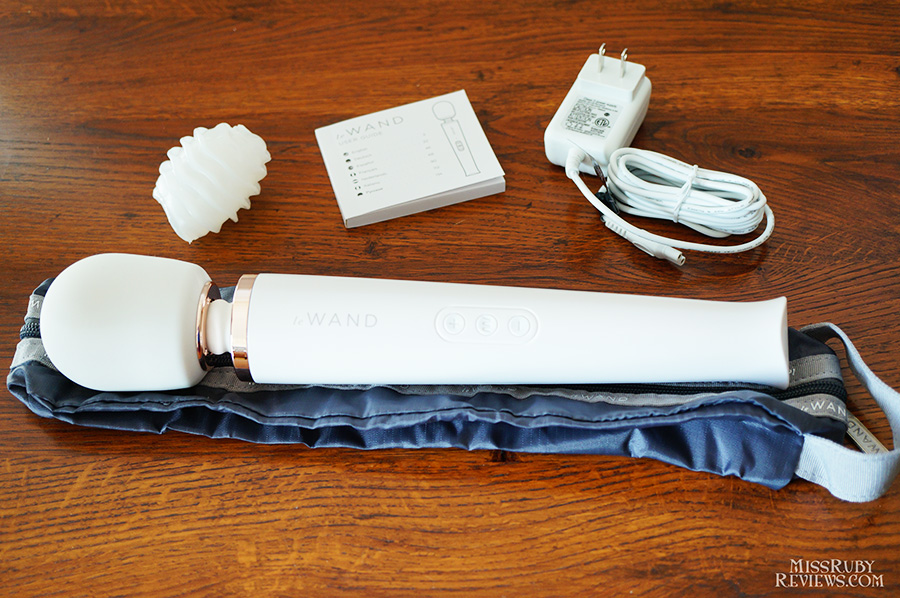 Le Wand is made with an ABS plastic body and a silicone head. This makes it bodysafe.

Le Wand is rechargeable; it’s recommended that you charge for three hours before your first use. While it’s charging, there’ll be a flashing light. A solid light will indicate full charge. If you aren’t currently charging it and the light is blinking, battery is low. You’re supposed to unplug Le Wand immediately after it’s done charging, so I don’t recommend trying to use this while it’s charging.

To clean Le Wand, wipe the head with a cloth and a mild silicone-safe cleanser. It’s not recommended that you wash Le Wand in water (this is not a waterproof toy).

My Experience with Le Wand 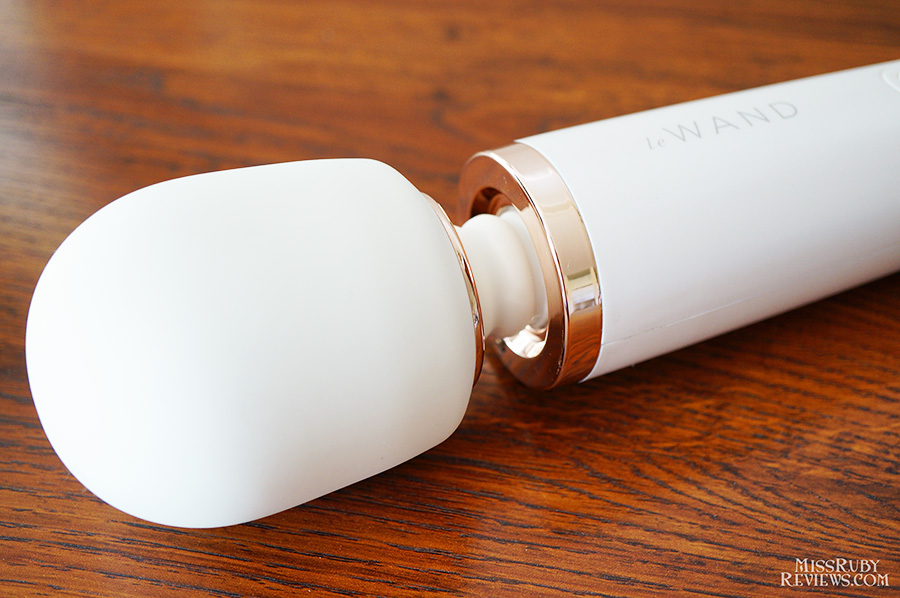 If I didn’t have Magic Wand Rechargeable or the Doxy Die Cast to compare it to, I’d probably be fairly pleased with Le Wand. It’s not a bad sex toy. It’s strong and pretty, which is more than can be said for a lot of vibrators out there. Its fabulous packaging also makes it gift-worthy. Where the MWR’s packaging is rather industrial, Le Wand’s packaging is elegant.

But the underlying buzziness is a snag for me. By itself, it’s not too much to handle. I can (and do) orgasm with Le Wand. Though I generally prefer pin-point stimulation, the motor is strong enough to get me to orgasm with this broad-style stimulation. For those of you with a larger budget, there’s also the promise of dedicated attachments (here and here), and dedicated attachments are always fun.

But I’m a woman with sex toy choice. I have multiple options. And because Le Wand is buzzier than the Magic Wand Rechargeable and the Doxy Die Cast, I’m ultimately reaching for those alternatives first (MRW, specifically, if I want something cordless).

In other words, while I don’t think Le Wand is a poor sex toy, I think there are better options. And when price comes into play, the choice is even more clear. At Peepshow Toys, Le Wand is $170. The Magic Wand Rechageable is $124. You can use my 10% discount code RUBY for both of these, but, either way, Le Wand is more pricey than the MWR. 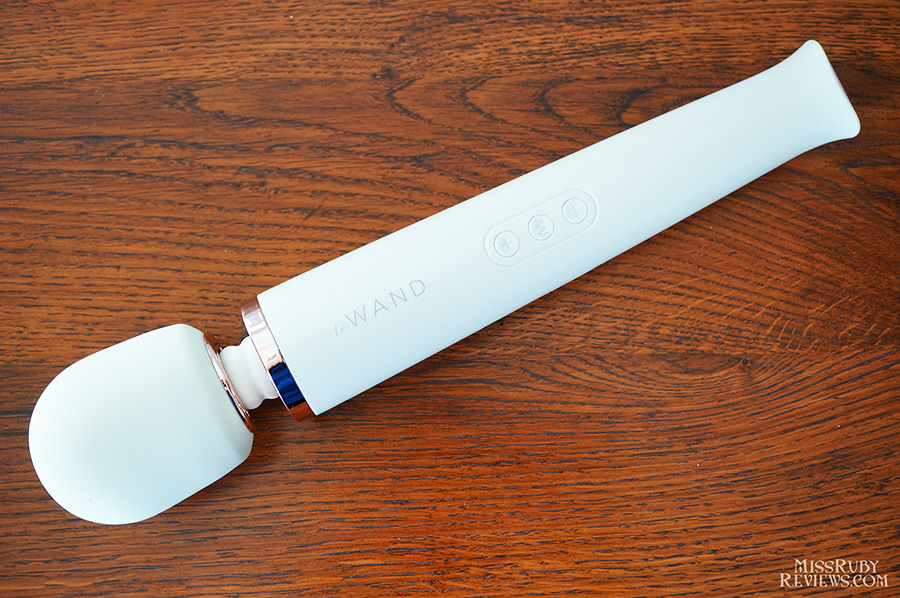 Le Wand isn’t a bad sex toy. By itself, it’s pretty good. It delivers orgasms and it certainly looks less industrial than other wands out there. My complaint is merely that it’s not as good as the current wands dominating the market. And if you’re going up against giants like Magic Wand or Doxy, you need to either stylistically differentiate yourself and/or offer roughly the same performance at a significant price cut. Unfortunately, Le Wand does neither. And I need rumbles. Give me a bit more rumble and I’d be happier with this product.

If I was recommending a cordless wand to a friend of mine, I’d recommend the MWR over Le Wand. Le Wand is pretty and it has beautiful packaging, but it’s unfortunately not as rumbly, or as quiet, or as inexpensive as the Magic Wand Rechargeable.

Head on over to Peepshow Toys to purchase Le Wand or the Magic Wand Rechargeable!