About the Brand: Orchard Corset

A little while ago, I tweeted about my desire to have a real corset. Like, a serious corset. Not the kind you buy for cheap in the lingerie section of sex toy stores, but a genuine, steel-boned, sturdy, this-thing-will-outlast-your-pet-turtle corset.

And then, because miracles do happen, I found myself receiving one in the mail. I couldn’t have been more thrilled!

Orchard Corset is a leading manufacturer and distributor of modern steel-boned corsets. They offer a good selection of corsets, multiple guides, and a strangely-addictive-on/off page. Communicating with them has been an absolute joy (they have been sooooo patient with me in this process; thank you so much!).

Why am I yelling at you about corsets?

They make you feel sexy.

Initially, I wanted to visually review this corset as a lingerie item. After all, I primarily I wanted a corset to wear as lingerie, one sturdy enough to take the rigors of energetic sex. But when it came time to take pictures for this review, my shyness won over and I wore it over a dress. Buuutttt…you get the idea. Paired with a bra and panties (or no bra, no panties), corsets take you to a whole new level of sex-bomb-self-confidence.

(As a side note, if you don’t want to use corsets as lingerie, using corsets as casual wear is totally a thing and it’s awesome)

I’ve worn corsets before. I’ve purchased what I saw available to me: inexpensive corsets that I added to my cart while sex toy shopping. These always had plastic boning, which didn’t do much for my fairly square torso. But steel-boned corsets are different; they’re “body-shaping” items. They shape your body. Plastic-boned corsets, on the other hand, don’t have the strength to shape your body (in other words, your body ends up shaping/bending them, which means you won’t get the right shape, they can be uncomfortable, and they deteriorate quickly).

In general (and in bed), steel-boned corsets are the way to go. I’m sold. Steel bones make you feel and look incredible. I don’t (at all) have an exaggerated figure without this corset. But, when I put on one of these corsets, it’s like I’m putting on my figurative ultra-sexy-ruby hat. Suddenly I’m all va-va-voom.

Steel-boned corsets also let you try something called “waist-training.” It’s the gradual (semi-permanent) hourglassification of your waistline through the use of corsets. It’s serious stuff, which requires a solid commitment to time and safety, but the rewards can be fun to witness. I didn’t try to waist-train, but I still think I saw some results.

These were my initial measurements, a month and a half ago:

These are my measurements now:

^^ I’ve lost weight overall from diet and exercise, but I’ve disproportionately minimized my waist by an extra half an inch. So something must be working.

The CS-201 (pictured left above) is a small cincher-type underbust corset. Designed to be wearable by short torsos (but able to be worn by just about anyone), the CS-201 focuses on the actual waistline, without much control over the upper hips. It gives you a moderate hourglass silhouette.

The CS-201 is a 6-panel corset with sixteen flat and spiral steel bones. The vertical center of the corset (where your waist lies) is reinforced with tape, to make sure there’s extra strength where most of the cinching pressure will apply. There’s also a modesty panel at the back.

Orchard Corset originally sent me the CS-201 in black cotton,  size 28, based on my measurements and torso length. Other fabrics and colors are available. As mentioned above, my starting measurements were:

My torso is super short, I discovered! Though I’m a fairly tall person (5 foot 10), my torso is only 8.5 inches long, something more commonly seen in people in the low 5-foot-tall range. With such a short torso, combined with my (robust) measurements, I didn’t have many options (just this or the 426-S).

When I received the CS-201 and started seasoning process (very important, don’t skip that step!), I IMMEDIATELY fell in love with corseting with a steel boned corset. When it’s sitting around your waist, the steel bones don’t provide any of the discomfort I imagined there would be. Instead, you feel as if you’re constantly being hugged, firmly and safely. Combined with the feeling that you’re wearing some sort of protective armor, plus the back support it provides, you’re left with a sublimely comforting sensation.

So, much to my glee, corseting felt so different to what I’d been picturing. I was also impressed how, apparently instantly, my stomach looked smaller (which for me, is quite a feat, seeing as most of my extra fluff lives there). 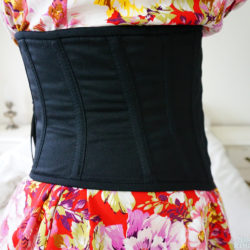 But, after going through the seasoning process, I worried that the corset was too small for me.  I struggled to get the modesty panel (at the back) to reach the other side of the rear busk (in other words, the closure at the back still revealed a vertical gap of skin).

When this happened, I emailed Orchard Corset and explained my problem. It turns out that I don’t have very much squish (I suspect this might have to do with my tall frame, and therefore less squish overall than someone having the same weight but a shorter frame). After we determined that the corset was, indeed, simply too small for me, they agreed that I’d better have a size up. I asked for the Cotton CS 426-Short this time, in size 30.

Even though the CS-201 size 28 didn’t work out for me, I’ve no doubt that it would have fit perfect in a size 30. I really recommend this option for people with short torsos, or if you’re going to need to be very flexible (the shorter the corset, the greater the range of movement).

(Note: Because bodies vary so much, Orchard Corset does have a return and exchange policy. Before purchasing, be sure to consult with Orchard Corset for measurement help. Once received, make sure to read these terms before trying on your corset, to ensure full credit if it ends up not fitting.

The CS-426 Short is designed to give you an extremely curvy silhouette. To do this, it’s has waist-tape reinforcement and a wide spring to the hips and the ribs, with 24 Flat and Spiral Steel bones to provide that extra support. This corset was adapted from the CS-426, which required a much longer torso. Seeing as my torso is vertically challenged, I was thrilled to see that Orchard Corset offered such an extreme silhouette for short-torso’d women like me. It also comes with 6 little hidden attachments for garter straps.

When I began to season the CS-426 Short, I immediately knew that the size up to 30 was a good move. The modesty panel in the back reached the other side of the grommets, completely covering my back. And, over the course of the seasoning process, I was able to nearly completely close the back gap. Compared to the CS-201 in size 28, the CS-426 Short in size 30 is a much better fit for me. 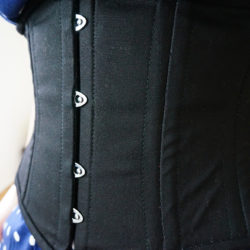 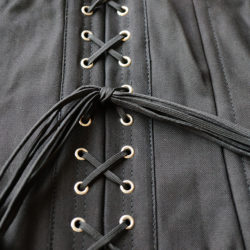 Like with the CS 201, I was again impressed with the quality of this product. The corset itself feels weighty when I pick it up, which is probably due to the steel boning and the cotton fabric. The fabric itself is strong and sturdy, and I can only really describe it as “jean-like without being jeans.” As for the nylon laces and their grommets: they haven’t frayed or weakened at all.

Despite its longer length, the CS-426 Short is just as comfortable as the CS-201. It wraps around my hips to hide any bulges, and it provides a much-needed coverage support for my upper back (in other words, there’s no back fluff hanging over the top edge. It’s all secured inside). I also like its more classic “true corset” look. 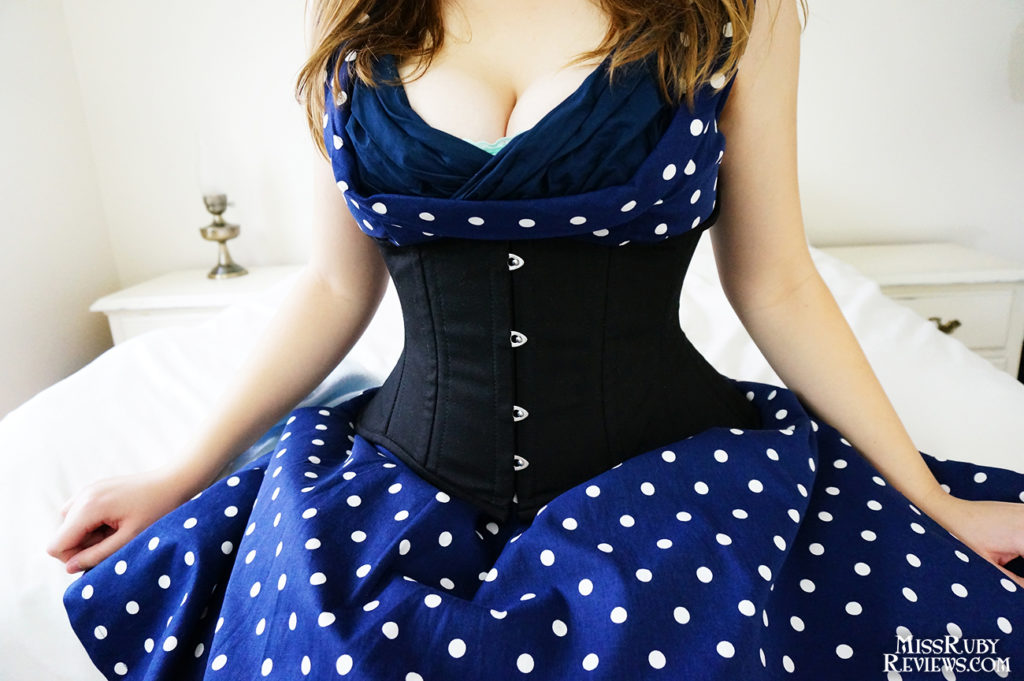 I should warn that the CS-426S has a massive hip spring, and I still feel like the corset is adapting to my somewhat-narrower hips. This corset may take longer to season than the CS-201.

I requested both of these corsets in cotton. They also come in Satin, Leather, and Mesh. I wanted something that was breathable (for, ya know, heavy activity), and the cotton didn’t disappoint. It’s not scratchy, stiff, or suffocating. I only wish that both of these also came in white cotton, because I have a lot of light/pastel underwear that would look amazing with it. The CS 426-S comes in white satin, at least, but I wish the same could be said for the CS-201. ?

To learn how to clean your corset, make sure you have a quick look at this video here.

Just a quick word on packaging. 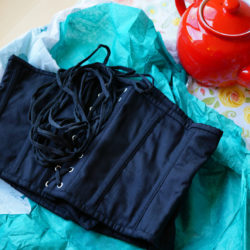 Orchard Corset ships their corsets wrapped up in soft paper. My corsets arrived in perfect condition. (During the second shipment, they even sent me a card and some extra laces, which made me super happy). When you unravel the two layers of tissue paper, your corset will lie rolled up with your laces already laced. Be sure to loosen your corset completely before trying it on.

I never considered that a steel-boned corset would be relatively affordable. But Orchard Corsets are frequently on sale for as low as $59, with most of their stock being regularly priced between $69-$89.

For those of you who plan to wear these corsets as lingerie (and not casual-wear, back support, or cinching), I can confirm that these two corsets are totally usable during sex. Though, I do warn you, you might want to loosen up a bit if you plan to have frequent orgasms…