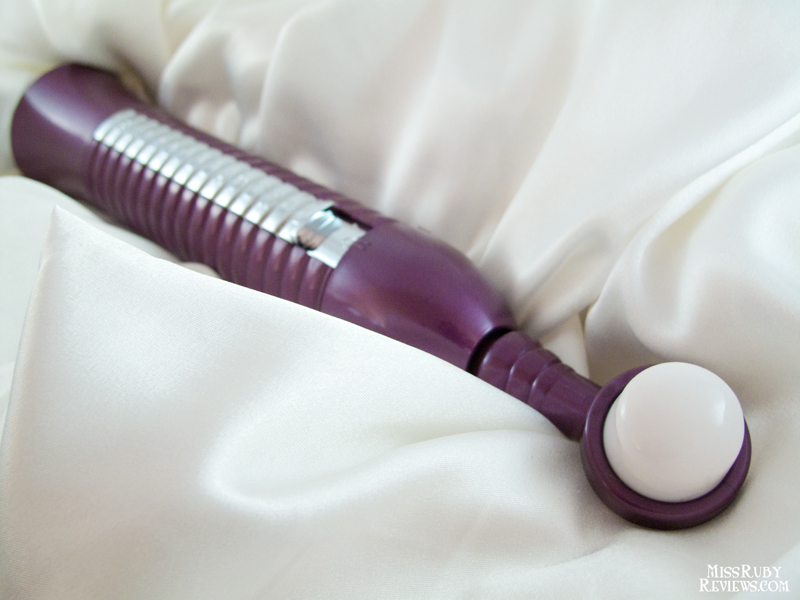 It’s so fun to squish that white attachment… 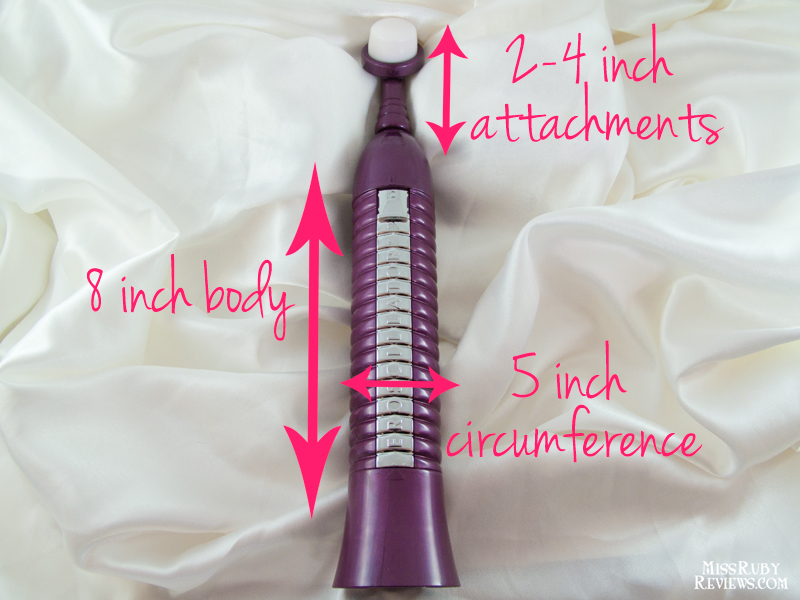 The bulk of the toy is made of the of cylinder shaft, which acts as the handle and control center. To activate it, you simply slide up the silver panel to switch through 3 increasingly-strong settings. Even the lowest setting is enough to grab my attention, though I quickly find myself switching to that high setting.

The Eroscillator comes with a long plug-in cord. As a mains-powered toy, you have the advantage of it never dying from lack of batteries, as well as the disadvantage of not being able to take it anywhere near water. And forget the 6-ft corded worries of the Magic Wand Original….this cord is long enough for anything I’ve needed, which is a definite bonus. 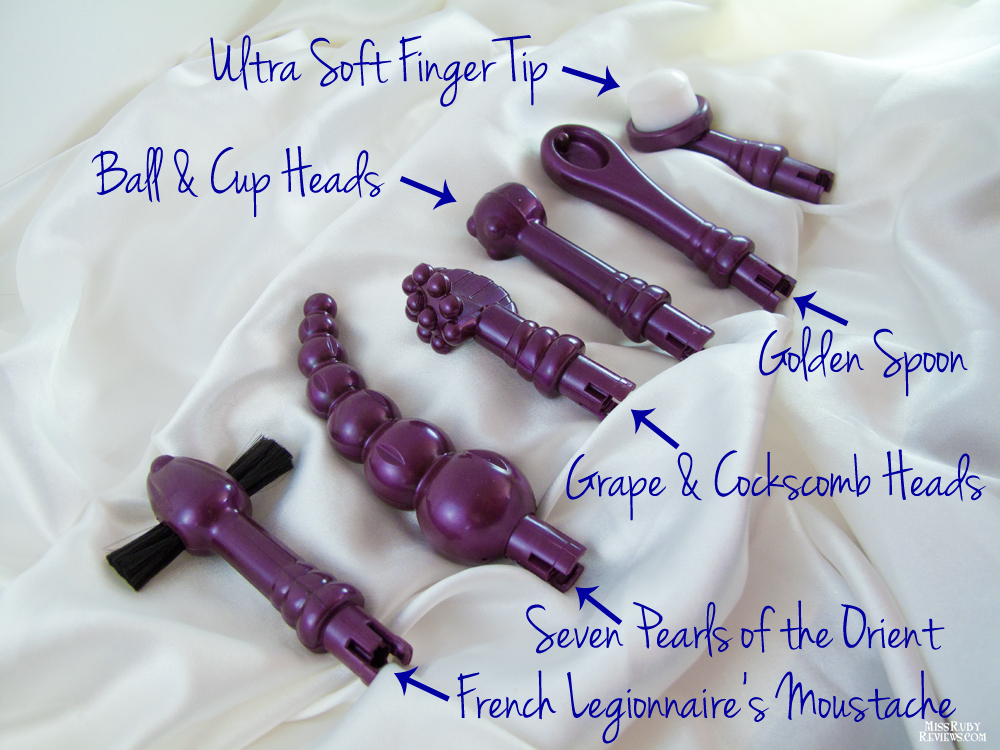 I can’t speak for the 7th attachment included in the Ultimate Combo, but I can run through the attachments I received in this package. I’ll run through each of these halfway through My Experience below.

The majority of Eroscillator is made from ABS plastic. The attachments, however, are all coated with TPE. I’m generally not a fan of TPE, and wish it was silicone, but apparently it’s a high-quality and non-porous TPE.

The Soft Finger attachment isn’t TPE though. Eroscillator says that “the Ultra-Soft Finger Tip marshmallow is made of medical grade silicone.” In all my time working with and reviewing silicone sex toys, I’ve never had silicone like this. I’d love to know why their silicone feels so different.

In any case, you can clean your Eroscillator by pulling off the attachments and washing them with soap and warm water. You can also carefully pull out the front cap and the control slider and wash those components. Please please please remember to not do any of this while your toy is plugged in. Always unplug your toy before going near water.

Eroscillator shipped their package out to me on July 15 and I promptly received it on July 22. 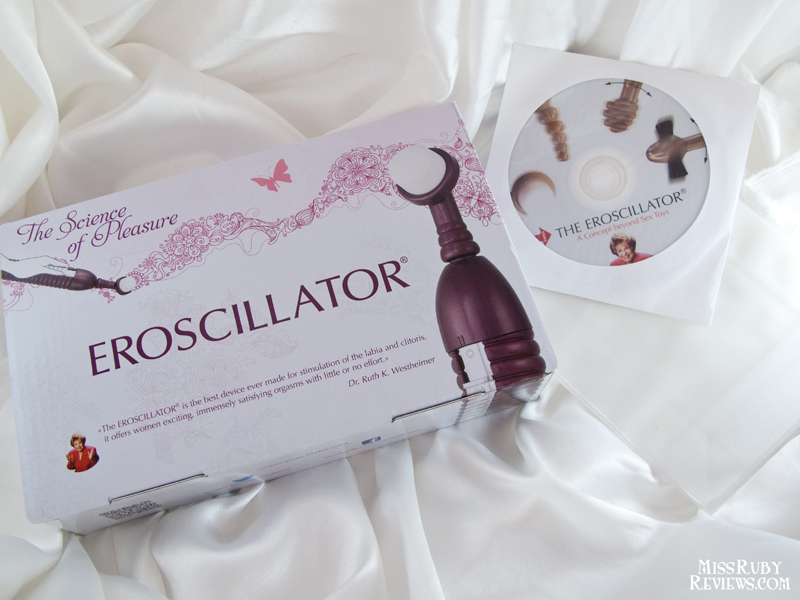 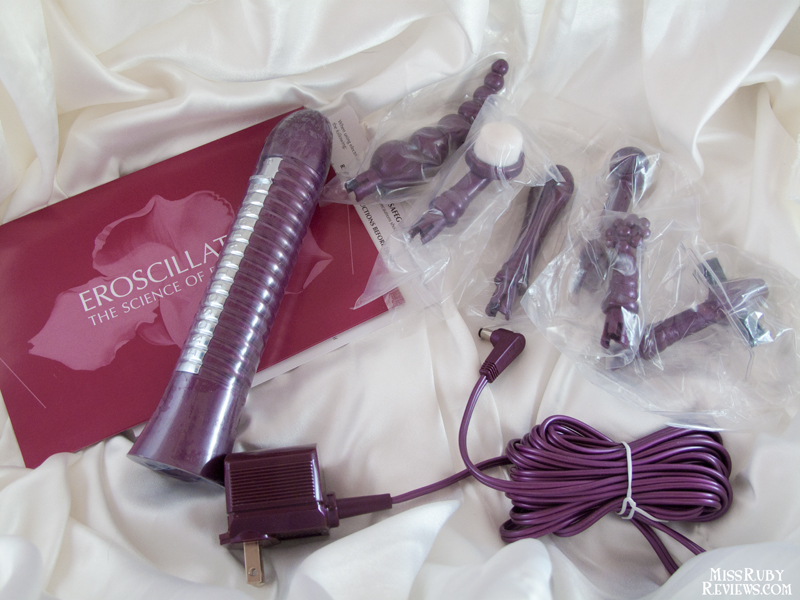 The Eroscillator was packaged in a cute white box, along with a promo DVD. Within the box, you receive a manual, your power cord, your Eroscillator and your attachments. You also receive a thin plastic sleeve to house your toy, but the sleeve doesn’t close and I didn’t find it to be a useful storage container. So I’ve been using a large freezer bag as a home for my Eroscillator.

I did check out the promotional DVD. It consists of a few testaments from women and couples (“These days with AIDS, you’ve got to be careful. You can’t go jumping into bed with some guy you just met. I feel like the Eroscillator helps me to say no until I’m ready to go to bed with someone!“), as well as a recommendation from Dr. Ruth Westheimer.

My Experience with the Eroscillator Top Deluxe with Soft Finger Combo 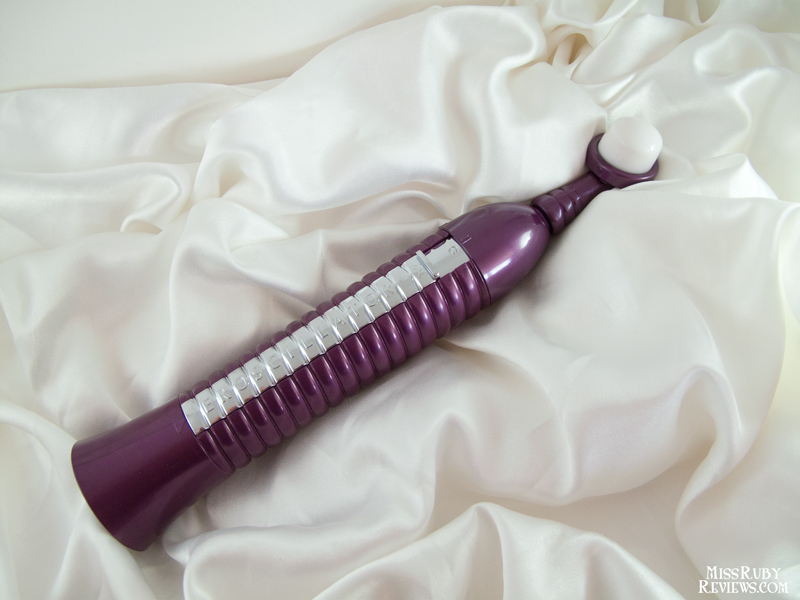 Second, things are quiet. When the attachment is pressed up against me, it’s silent. Not totally silent, mind you, but certainly quieter than you’d ever expect from most strong vibrators. It’s easy to miss it if you’re in the same room as the toy. There’s no way you could hear this through walls, so this is definitely something to look into if you’re really concerned about being discreet.

That being said, once the orgasm does arrive….wow. The orgasm takes its time, lasting longer than I’m used to via my hands or a vibrator. Instead of the orgasms I get from the Magic Wand Original (which are quick, strong, and to-the-point), these orgasms seem to be more generous, with a slow, gentle crescendo and decrescendo. Very satisfying, though I haven’t been able to coach 2nd or 3rd orgasms out of me with the Eroscillator. For me, this is a one-orgasm pony, but that one orgasm is really powerful. And satisfying. One orgasm with this and I don’t feel the need to go on to a second or third.

And how about the heads? Below, I’ll go into each: 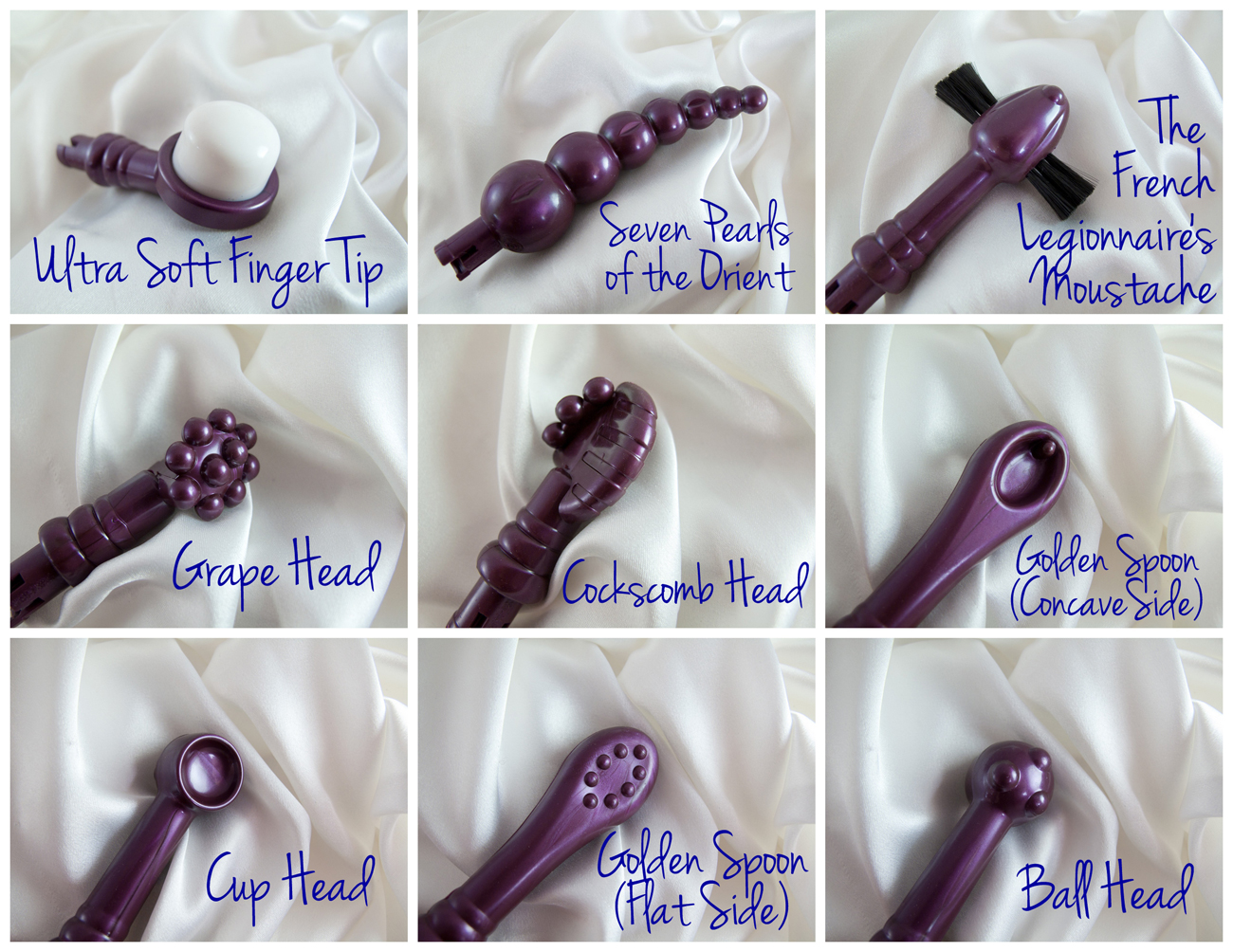 Has the Eroscillator replaced my beloved Magic Wand?  No, because I generally want my orgasms to be quick and in abundance. With the Eroscillator, I experience slow-building orgasms that are certainly worth the effort. But the Eroscillator is a time-commitment toy, as it takes around 20 minutes to get to orgasm. Those orgasms do feel different than orgasms I receive from vibrators though: an oscillating engine like this one certainly delivers on unique orgasms. So when I’m in that mood, I’m happy to have this in my closet.

So it this worth the cash? The Top Deluxe (Soft Finger Combo) in Purple goes for $239 (though to save $10 you can go with the original brass-coloured version). The step down from this combo is the Eroscillator 2 Top Deluxe ($194) — and this version doesn’t include the Soft Finger attachment.

Because I’m such a fan of the Soft Finger attachment (it’s really the only attachment I’ve been using regularly), I recommend that you aim for a package that includes it. There’s three packages that include it: The 2 Plus with Soft Finger combo (a weaker version),  the The Top Deluxe with Soft Finger Combo, and the Ultimate Combo. There’s also the Eroscillator Gold if you need something gold plated to line your sex toy chest.  In any case, if you’re already splurging on an Eroscillator, you may as well shoot for the best attachment.

If you want slow-building, long orgasms, this is a toy to try. But if you need quick, rapid-fire orgasms, you may want to look elsewhere.

To buy the Eroscillator, here are some recommended stores: 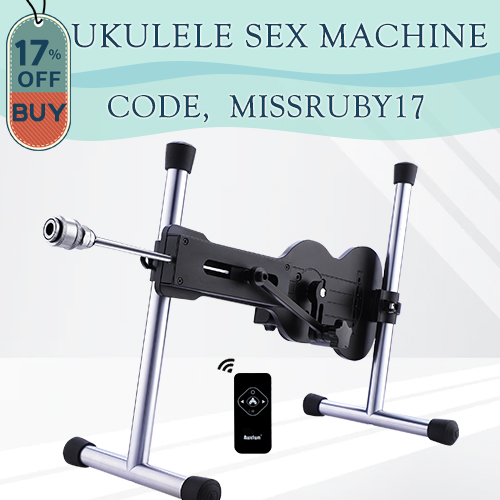 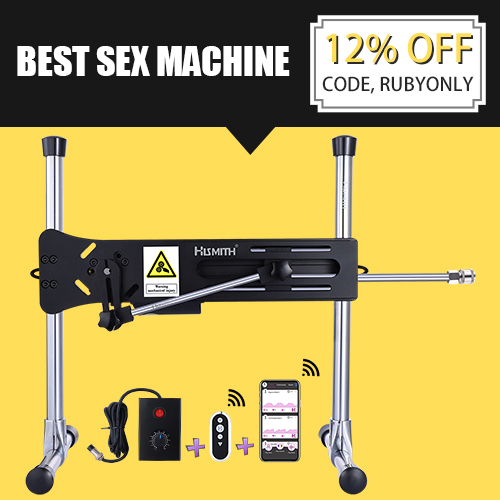