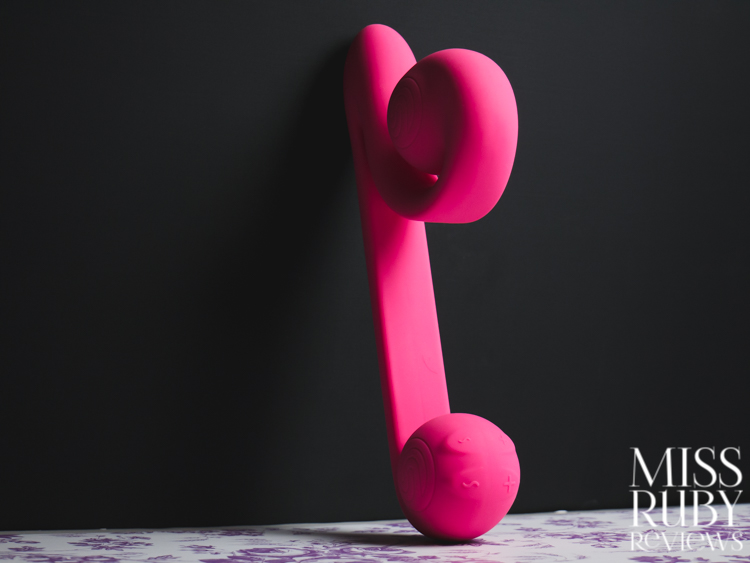 Who knew that snails could be sexy? This sex toy is so strange, so peculiar, that I just had to get my hands on it… Read on for my SnailVibe review! 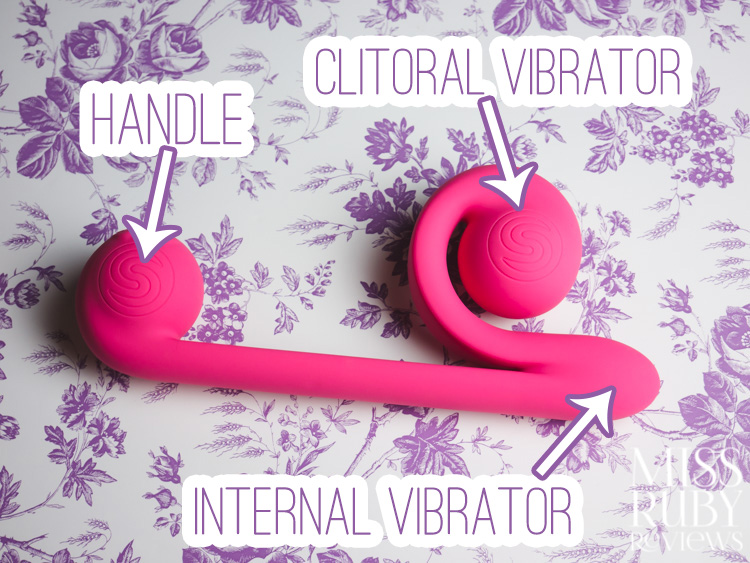 The SnailVibe is a new dual stimulator that’s eye-catching, to say the least.

Part wand and part rabbit, the SnailVibe leans on a snail-ish flexible spiral design to offer dual stimulation. There are two motors: one in the swoopy, larger ball (for your clitoris), and the other in the pointy end (for your G-spot).

As you insert this vaginally, the vibrating ball on top (which presses against your clitoris) stays in place. The deeper you insert it, the more the flexible spiral unfurls, but the clitoral ball/motor stays in place. It’s VERY hard to describe, so look at the motions in this video below:

Just to be clear: This is not an automatic thrusting toy. It doesn’t move by itself. You need to thrust it using your own hand.

Below I’ve taken a few photos of how the SnailVibe would be positioned if it was: partially inserted, moderately inserted, and fully inserted. 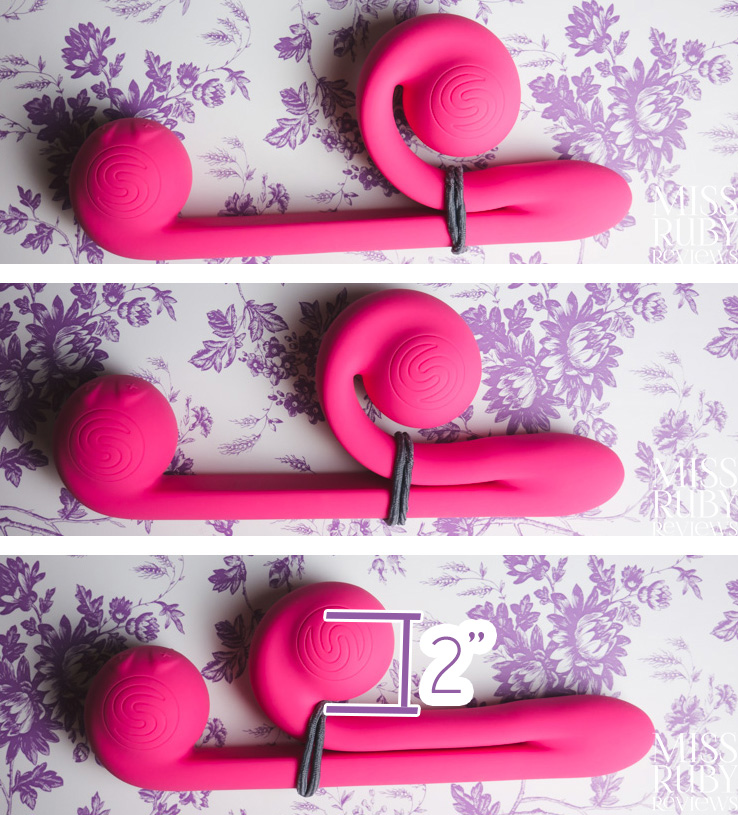 The SnailVibe is waterproof, rechargeable, and coated in bodysafe silicone. The vibrations in the clitoral “ball” stretch about 2″ tall, so this should accommodate people with a clitoris-to-vagina distance of 2″ (this is nice because most rabbits assume every user has a tiny distance, when that’s not always the case).

I received my SnailVibe in Pink. It’s a bright, cheerful, Barbie pink. It also comes in Purple if you prefer. I do wish it offered a few more non-conventional colour options, but my guess it that this design and name was such a risk in the first place, that they probably didn’t want to take an extra risk of a novel colour!

Though designed as a rabbit for G-spot/Clitoral use, I wouldn’t be surprised if someone tried to use this anally. The clitoral ball is large and should act as a flared base. Of course, heed caution any time you consider using a sex toy for something it’s not specifically designed for. 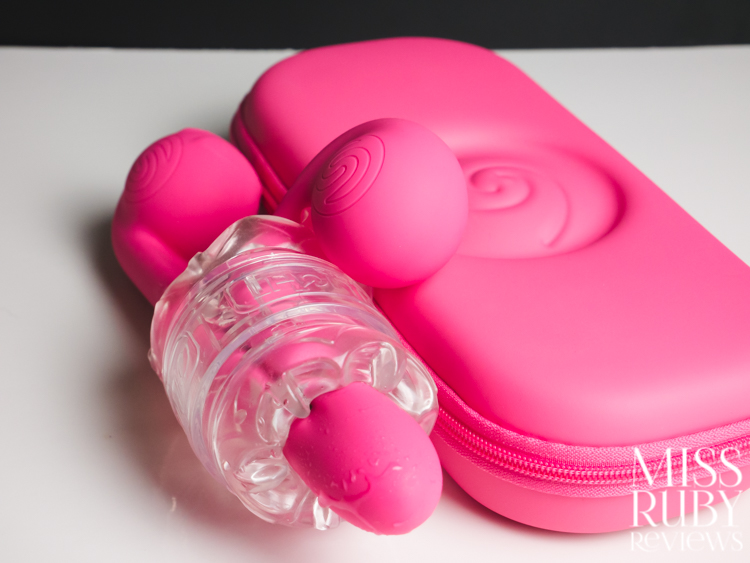 This section is to help folks determine if they might have any issues using/accessing this toy.

How to Use the SnailVibe 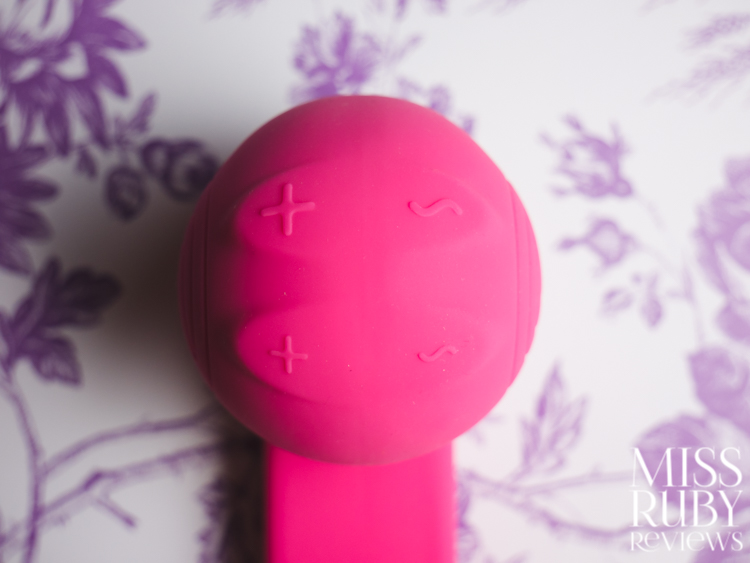 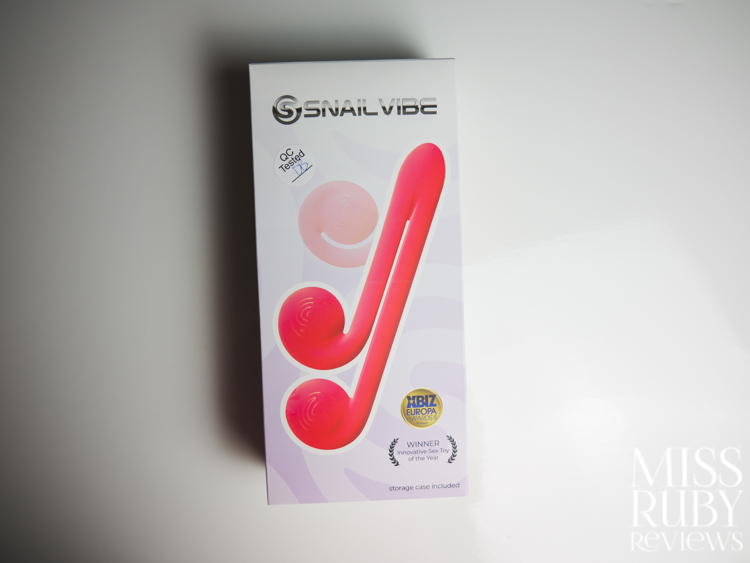 The SnailVibe comes packaged simply in a cardboard box. It’s not particularly luxe or flashy or discreet.

What did impress me, however, was the storage case that comes with the SnailVibe. It’s a beautiful hardshell zipper case in the colour of your SnailVibe. The zipper and case are very good quality — it’s rare for sex toys to come with such a great case.

Along with the SnailVibe and the storage case, you also receive the USB charging cord and the instruction booklet. 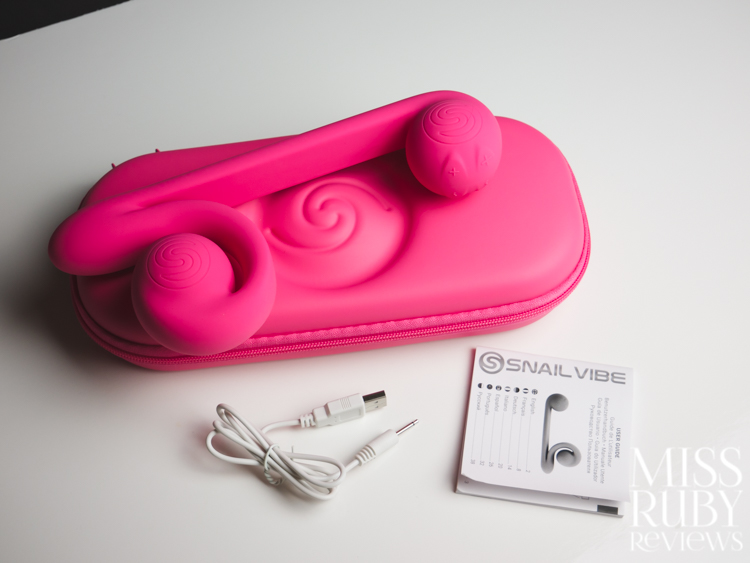 The SnailVibe is coated in silicone, making this non-porous, non-toxic, and free of phthalates. The silicone is matte and draggy to the touch before adding lubricant.

To clean, I wash in warm, soapy water before and after each use. Take extra care in the small narrow gaps. Allow to air-dry before storing.

To charge your SnailVibe, insert the needle end of the USB charger into the pinhole at the very top of the toy (above the buttons). Then plug your cord into your computer or a USB wall adapter. An LED light will come on while charging (flashing during charging, and solid when fully charged). A full charge takes about 2 hours and will give you up to 1 hour of playtime.

A water-based lubricant is required to use this toy to function normally. If you don’t have some already, I recommend Sliquid H2O.

SheVibe mentions a 10-year warranty on their product page for this toy. I can’t find verification of that on SnailVibe’s website, and I can’t find much detail in the instruction manual, so I can’t confirm. But if it’s true, that would be pretty amazing. 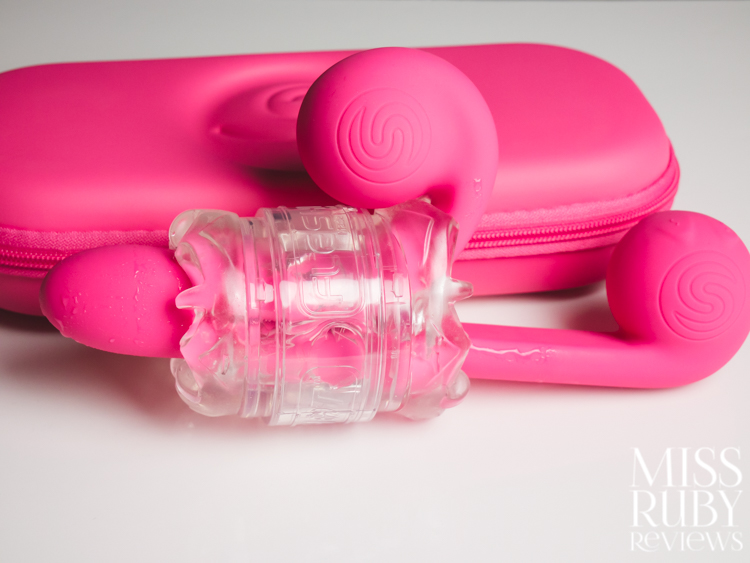 Overall, my experience with the SnailVibe was surprisingly positive, but this toy isn’t without its drawbacks. I list the Pros/Cons below.

Why I love the SnailVibe

The SnailVibe may have some issues, but I have to admit — this thing feels great.

If a vibrating sex toy isn’t strong, it doesn’t matter how fancy or innovative it is. Motor strength is SO important. And much to my relief, the SnailVibe carries two strong motors. 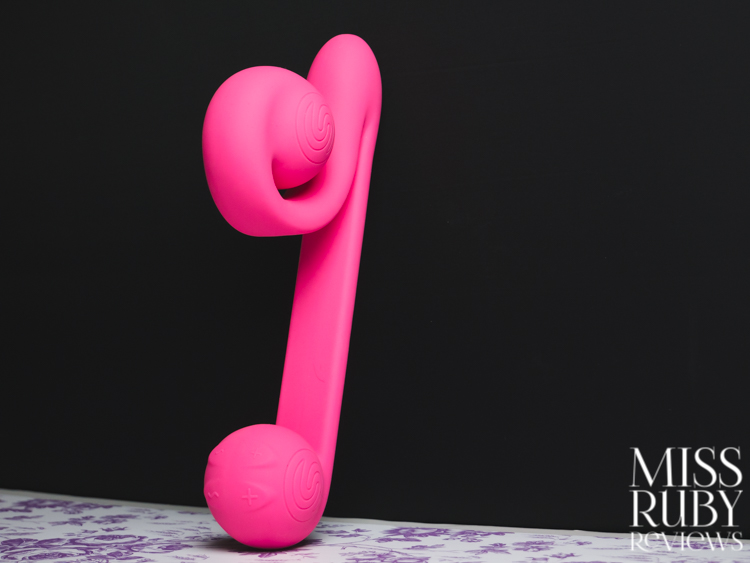 2. The clitoris is always stimulated

I was pretty thrilled to find that the whole swoopy snail design actually works. As long as the SnailVibe is properly lubricated, when I thrust the rumbling ball glides along my clitoris. Unlike a conventional rabbit that loses contact with your clitoris when you thrust out, the SnailVibe keeps in contact the whole time.

I personally need clitoral stimulation to orgasm (always), and I’ve loved my orgasms from this toy. The internal shaft is straight and easy to angle towards my G-spot.  And, like a wand, the clitoral head is broad enough to stimulate around the clitoris and parts of the vulva as well. Hot damn.

I also love that there’s some versatility with how I use the SnailVibe. I can choose to only thrust deeply, or only shallowly, or not at all — I can hold it deep inside, in place, without moving, and let the rumbling motors do the job.

The We-Vibe Nova 2 (review here) is the only other rabbit (that I’m aware of) that stays in contact with the clitoris the whole time during thrusts. It’s the same price as the SnailVibe. The We-Vibe Nova has the advantage of having a curve to better target the G-spot which, I’ll admit, would have been great on the SnailVibe too. But, for those of you who love that deeper stimulation, the SnailVibe offers a whole extra inch of insertable length compared to the We-Vibe Nova 2.

I also kind of like this toy because it’s so… weird. It’s not every day that you see a sex toy named after a shelled gastropod. This curled design is clever. I’m enjoying that it’s a novel and different addition to my toolbox. 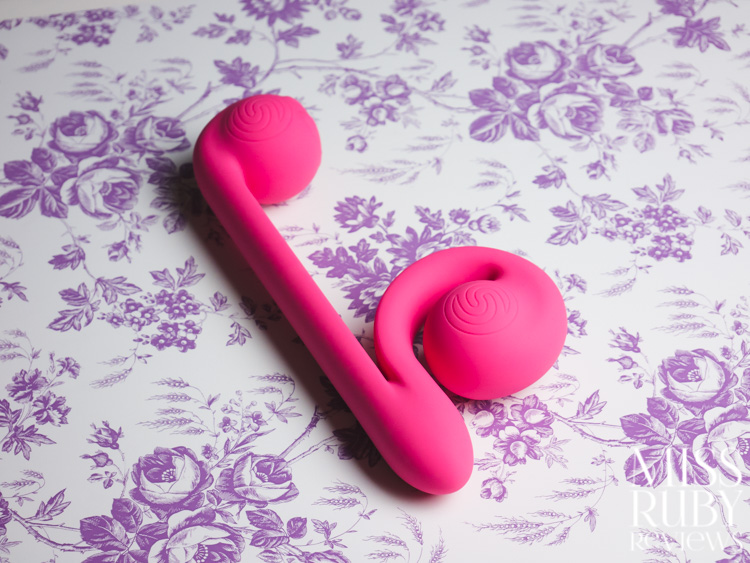 1. You need LOTS of lubricant.

As I thrust the SnailVibe, the clitoral ball kind of rolls. This means my clitoris kind of glides over different parts of the ball during each thrust. If you don’t use lubricant, your poor labia and clitoris are going to get rug burn. The clitoral ball CANNOT glide without a lot of lubricant. I made this mistake on my first try — the clitoral motor/ball just sort of draaaaags against the clitoris as it tries to move. Ouch.

So please buy this as well and coat EVERYTHING (except the handle) until it’s good and slick. 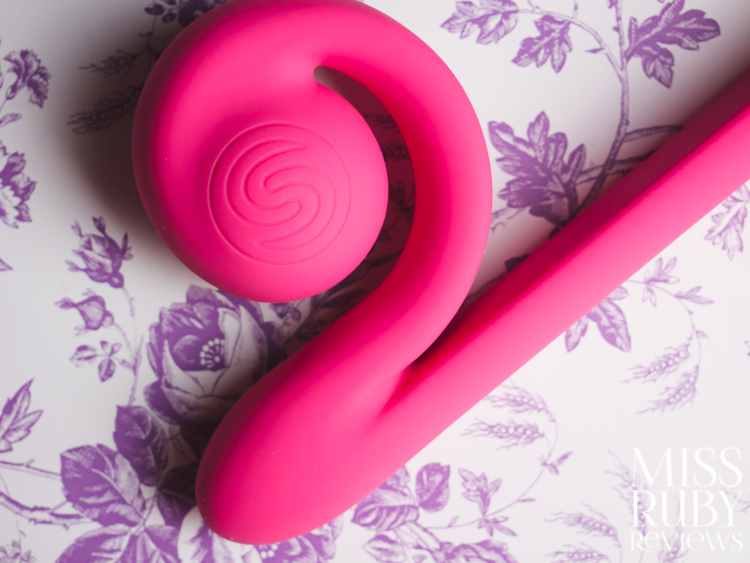 As you thrust with the SnailVibe, the gap between the rigid shaft and the flexible swoopy arm narrows and closes. If you keep your pubic hair long, I honestly think there’s a mild chance it will get pinched and pulled as the gap closes. I wasn’t brave enough to risk it so I shaved beforehand just in case.

(Side note: Can labial folds get pinched? I don’t think this is likely because the labia are pulled away to the sides during insertion and the angle should keep you safe. I didn’t have any issues with getting pinched, but if you are worried, go slow.)

The SnailVibe doesn’t have a (–) button, so you can’t go back. When you’re moving up the 5 intensities, if you go too far you’re back at the lowest mode. It’s not a dealbreaker for me, but some might find this annoying.

The SnailVibe isn’t whisper quiet. There’s a chance someone could hear this through a closed bedroom door (especially if your walls have poor insulation). 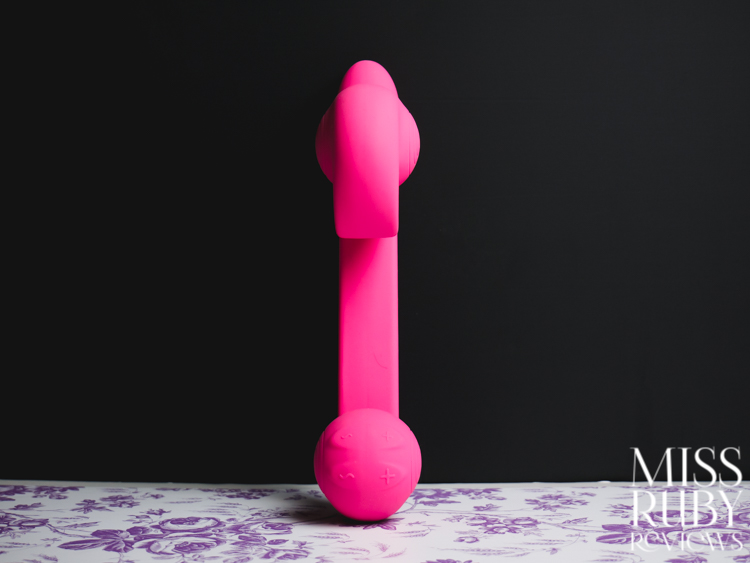 You can pick up your own SnailVibe here at SheVibe! At the time of this post, it retails for $150 USD. Why do I like SheVibe? They offer international shopping and currency, carry thousands of amazing bodysafe products, have a great team working for them, and feature unique artwork all over their site!

See below for my SnailVibe review breakdown.

Previous Post: « The Logistics of Loving Large: Having Sex As and With a Plus-Sized Woman [Guest Voice]
Next Post: How to Choose a Hands-Free Masturbator [Sponsored Guest Post] »