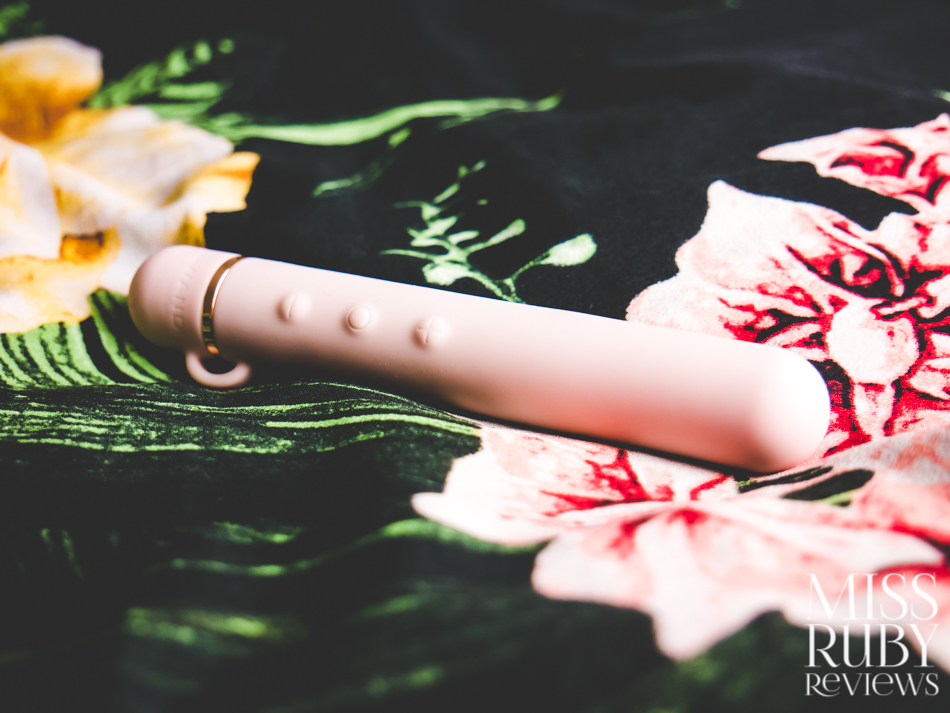 The word “Baton” implies a huge club to clobber someone with, but Le Wand Baton is not that kind of baton… it’s a delicate, feminine, beautiful little vibe. Read on for my Le Wand Baton review! 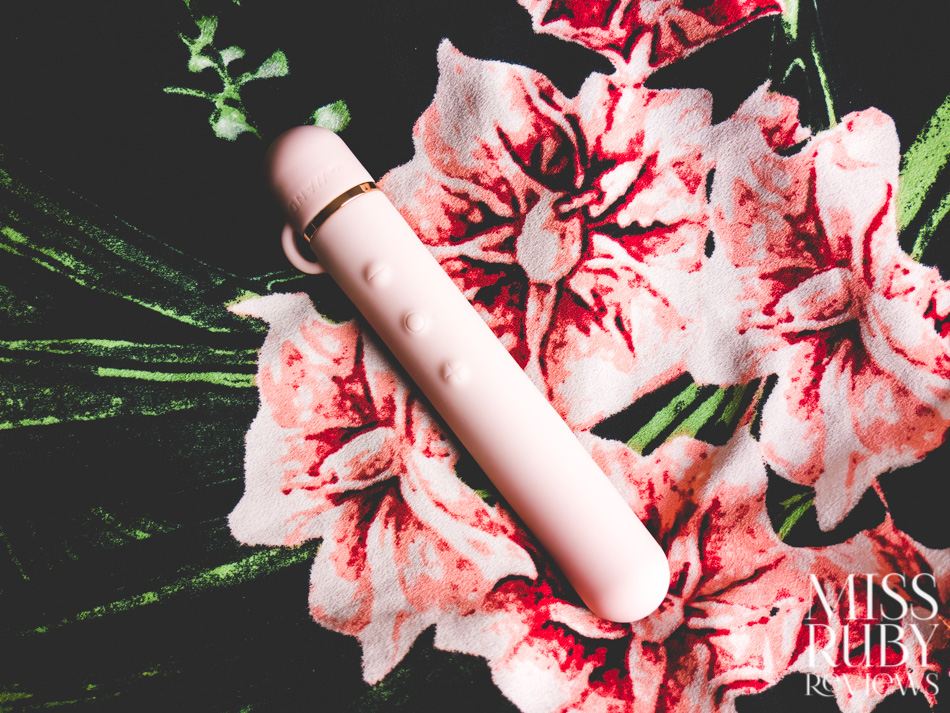 Like the Point vibe, the Le Wand Baton is also weighted, which gives it a durable, high-quality feel. It has a simple, streamlined design with clean lines and nothing overly busy or garish. The body has 3 buttons near the base and a silicone cover at the bottom that slips open to show a USB port. This vibe offers 15 vibration modes and 6 intensity levels, and a slightly flexible tip.

I received the Le Wand Baton in Rose Gold. This is a beautiful blush pink with a rose gold trim. If you’re looking for something less feminine, the Baton is also available in a sleek Black. But I love pastels, and this rose tone is gentle and girly and a far cry from your standard typical neon purple toys of the past. 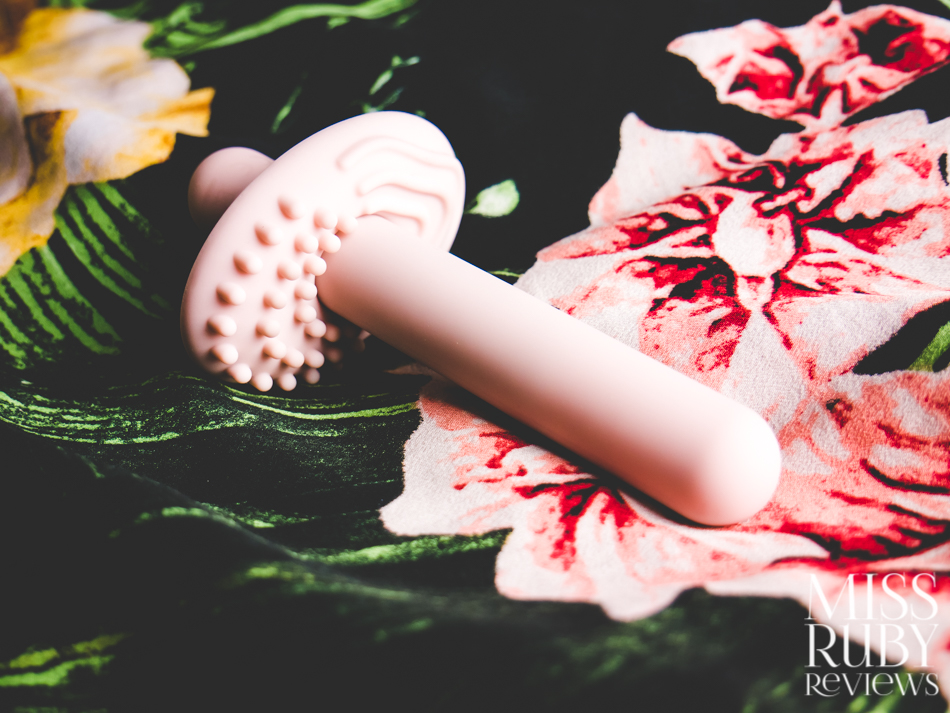 Above: The Le Wand Chrome Baton with its silicone ring to enable internal use

The Le Wand Baton also comes with a textured silicone ring (pictured above). This slips over the Baton and slides down to rest on the little silicone loop at the base. It’s well made, quite thick, and deliciously textured — some nubby bits coat the first half, and gentle wavy lines coat the second half. 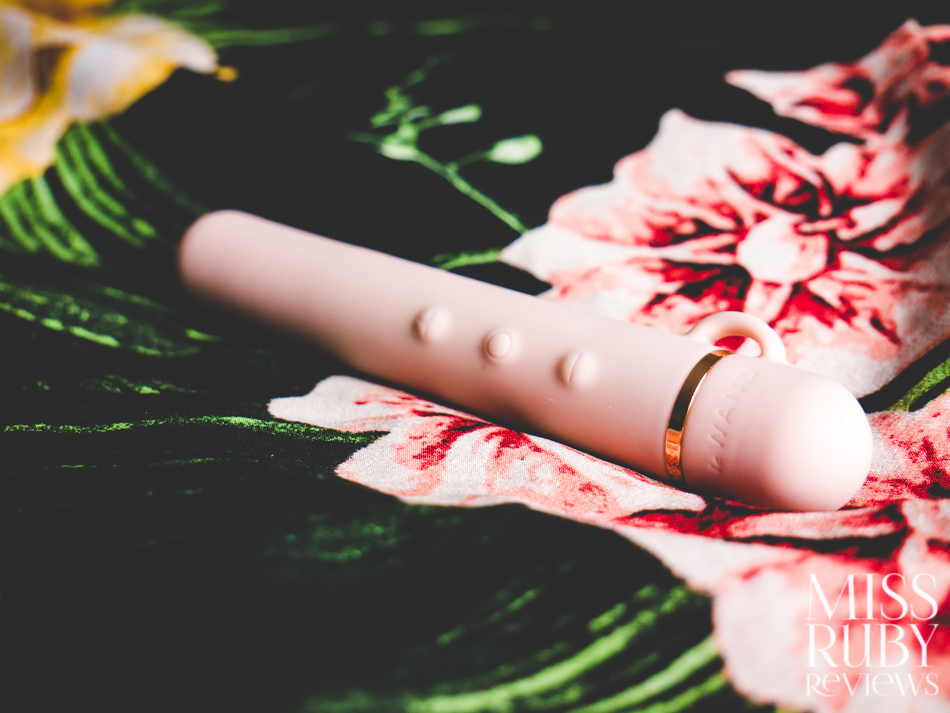 As much as I’d love to write more praising its design style, I should note that I think the Le Wand Baton looks almost exactly like the Crave Flex, a toy by another company. It bears a shocking resemblance in my opinion, and it looks like Le Wand basically just made a rounder version of Crave’s Flex. Le Wand is getting a name for itself for mimicking other companies’ designs, which isn’t great… Still, I’ll try not to let my irritation bias my review of how this toy actually functions.

How to Use the Le Wand Chrome Baton 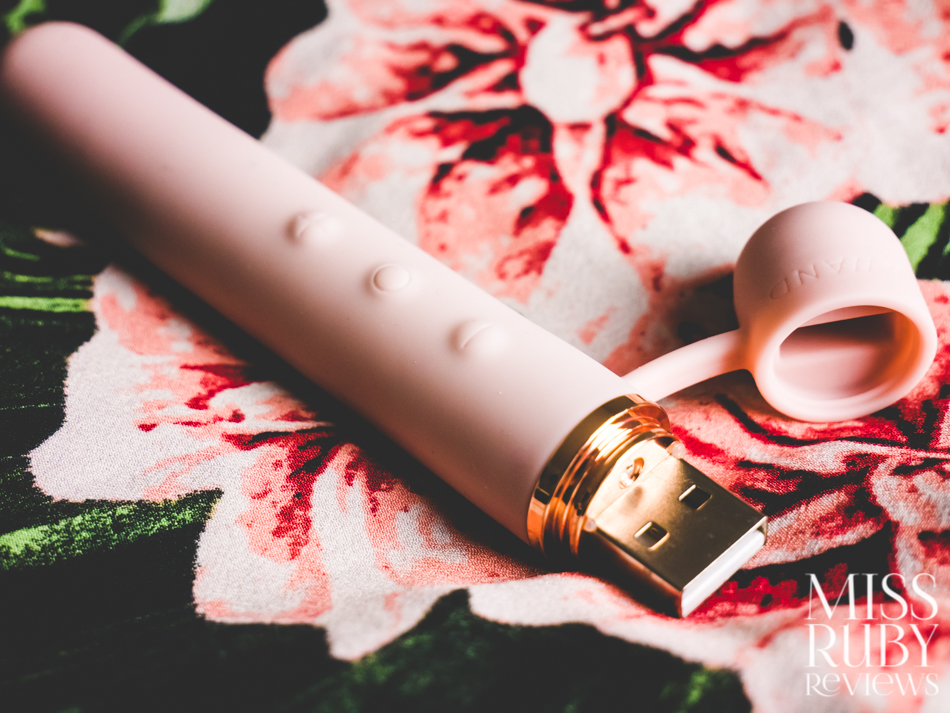 To use the Le Wand Baton: 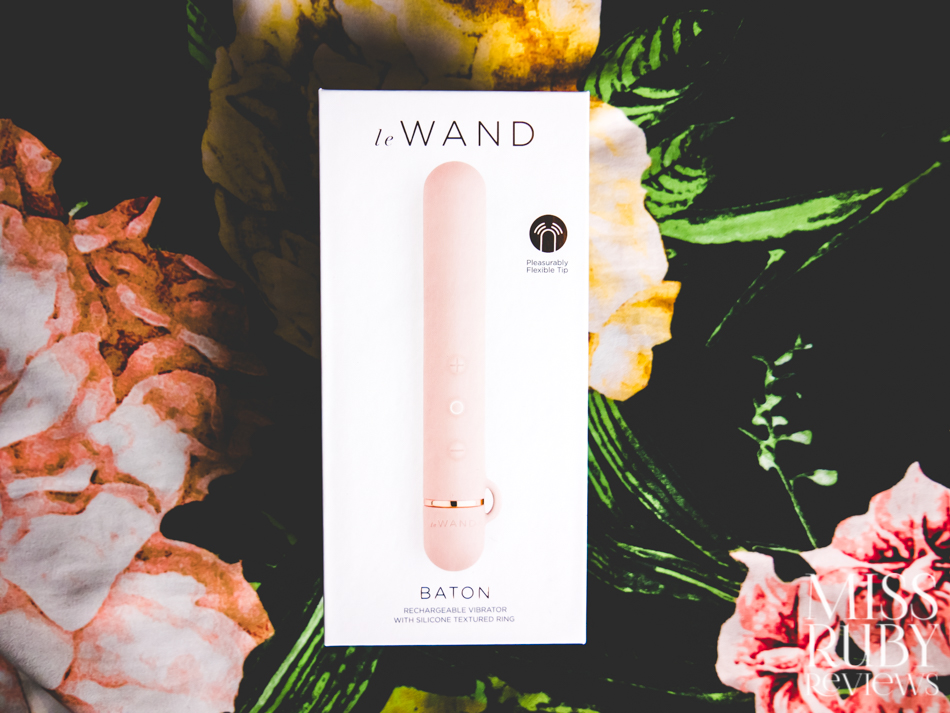 The Le Wand Baton is packaged elegantly in a clean white box.

Inside the box, you receive the Baton, a manual, the textured silicone ring, and a fabric drawstring pouch.

There is no separate USB charging cord – just pull off the cap at the base to reveal the USB. 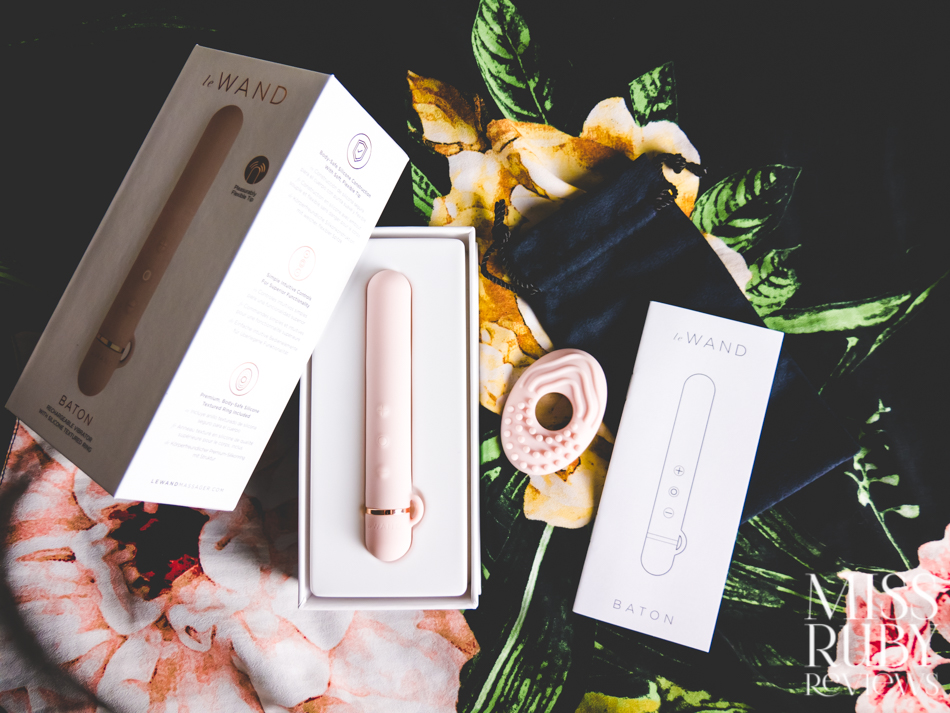 The Le Wand Baton is made with silicone and a thin band of chromed steel. Silicone is non-porous, non-toxic, and durable, making it one of the best materials you could ask for in a sex toy. Chrome-plated steel is also body-safe, but I recommend treating it with care because I found it to scratch and dent very easily.

To clean, Le Wand recommends washing with a mild silicone-safe cleanser before and after use. I just use my regular hand-soap, but you can always buy something like this as well.

If you’d like to add lubricant, avoid silicone-based lubes. Instead, opt for a good quality water-based lubricant like the Sliquid H2O.

My Experience with the Le Wand Baton 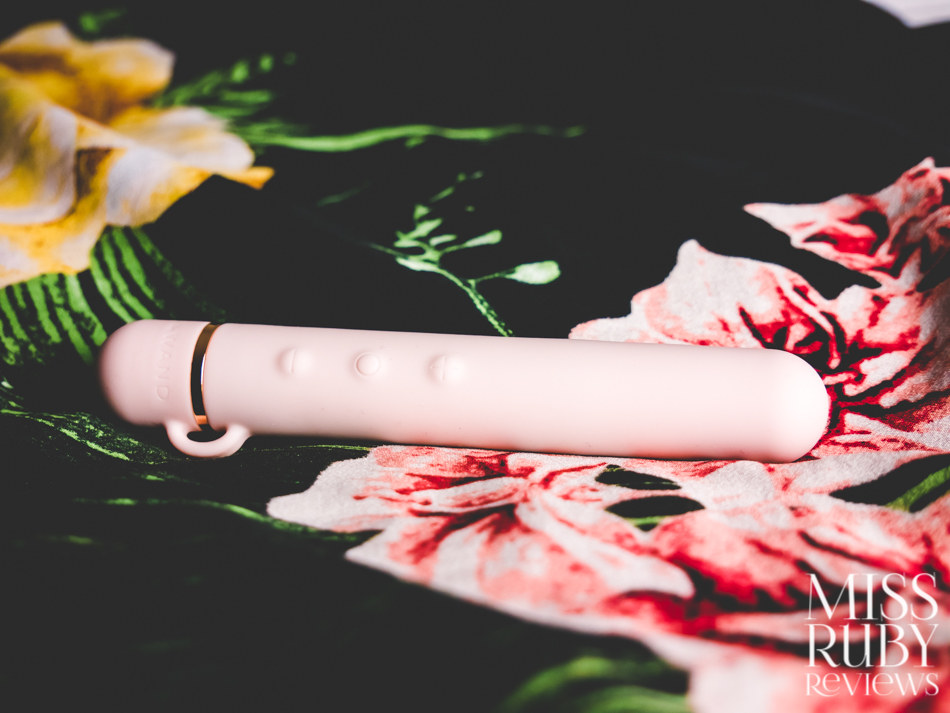 Well, let’s start with the good.

The Le Wand Baton is incredibly quiet. Even at full speed, it’s virtually silent. It’s even quieter than its more expensive counterpart, the Chrome Point, and I can’t imagine anyone accidentally overhearing this. If you have roommates, you’ll be able to use this behind closed doors without the worry of being heard. 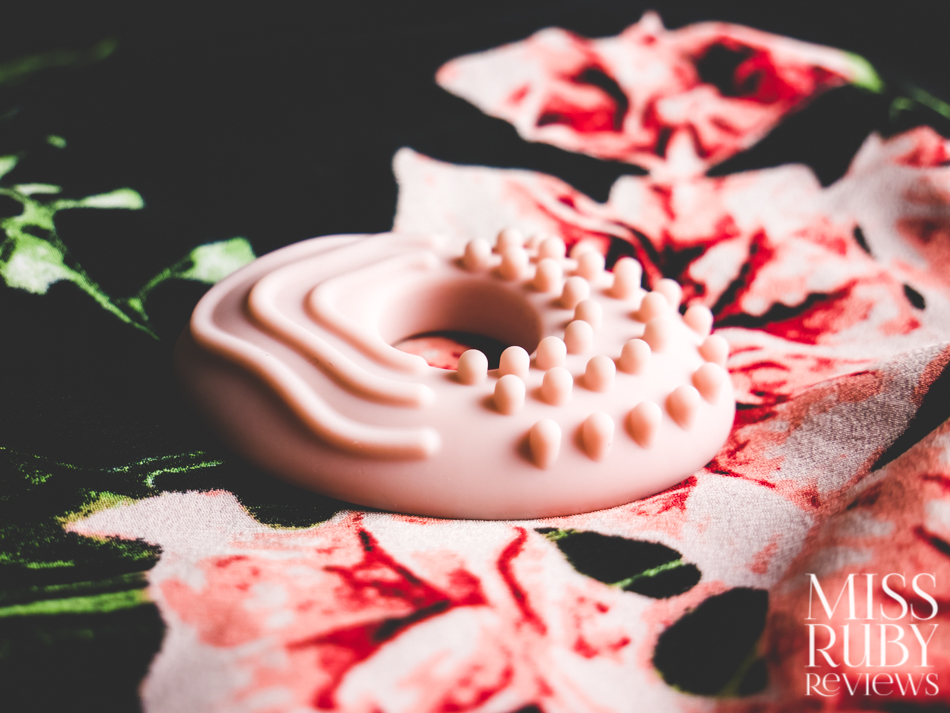 The Le Wand Baton also gives me the kind of luxury features you’d expect from a toy at this $100 price. For ease of use, I LOVE the integrated USB port — it makes recharging this toy so much easier and there’s no way to lose any charging cable (which I’ve done on more than one occasion).

It’s also waterproof, comes with that handy travel lock, and even has a 12-month warranty to protect against defects. 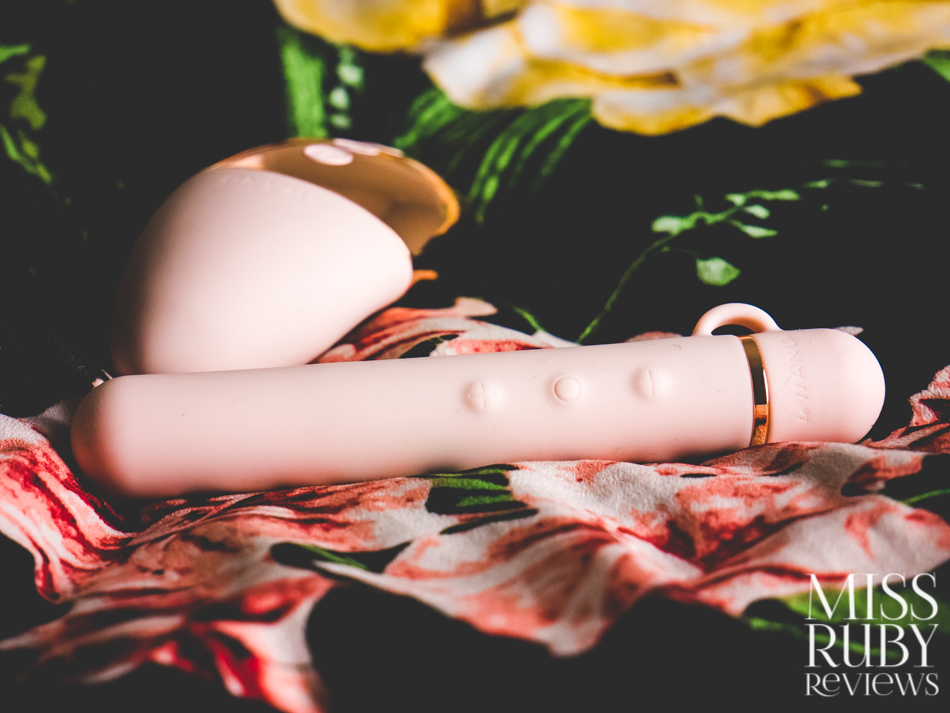 With all these great features, wouldn’t this be the perfect toy? Well…

…Now for the bad.

By bad, I mean its strength. The Le Wand Baton does so many things right, but it fails me where I need it most — power. While the vibrations feel nice (albeit buzzy), I need them to be at least twice as strong as they are. For me, they’re too weak to orgasm from, and they’re considerably weaker than the Chrome Point. Unless you’re absolutely certain that you love very gentle vibrations, this probably won’t be strong enough for you.

I love Betty’s Toy Box and they sell a bunch of my favourite vibes. I recommend the We-Vibe Tango ($79), the FemmeFunn Ultra Bullet ($59), or the Blush Exposed Nocturnal ($34).  The We-Vibe Tango is the gold standard for bullet vibrators, though the other two also pack really strong punches. These three may not be as pretty as the Le Wand Baton, but any of those will give you stronger and rumblier vibrations.

If you’re still interested in the Le Wand Baton, you can pick one up at Betty’s Toy Box for $100! Why do I like Betty’s Toy Box? They ship discreetly to continental US for free on all orders over $49, plus you can get a 12% discount off your whole purchase with coupon code MISSRUBY.

See below for my Le Wand Baton review summary. 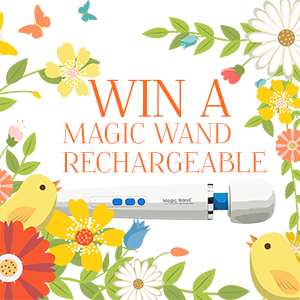